10 things I learned at BritMums Live! 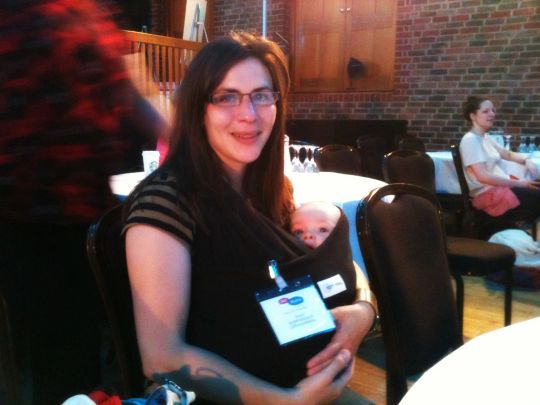 After recording 12 things I learned at Cybher, I felt the need to match that for BritMums Live!, the second blogging conference I’ve been to this year. I got to ten but they’re good ones.

1. I can hand express!
We made a last minute decision that Laurence and Talitha would stay behind at home in Bristol instead of coming with me to London. She has a cold and is cutting four teeth, we think, and the thought of dealing with a sick baby for hours anywhere but home just didn’t appeal to him, quite reasonably.

So I threw a bag together, last minute as usual and surprised at how easy it is to pack when you haven’t got to think about an extra change of clothes should someone leak random bodily fluids. It is easy. It’s easy to forget a crucial part of your breast pump!

I realised on the train and madly tweeted around, begging any other milky mothers to take pity and bring me a pump. Simply Hayley kindly brought me a manual pump the next day.

It did mean I had to hand express into a coffee mug over night, which I was so stressed about but you know what? I was able to do it. In fact, once I got into it, I couldn’t believe how effective it was! I think part of the barrier for me was my own lack of confidence so thanks, Contented Mummy, for giving me some tweeted breastfeeding peer support and a kick up the bum (up the cleavage?) by offering to hold the cup while I squeezed, though that wasn’t needed in the end – I hasten to add!

However, the fact that I tweeted and had been variously retweeted meant that a lot of conversations at the conference began with: “How are the boobs?” I’m thinking of bringing this into common usage. Along with “blogger mastitis” as suggested by Transatlantic Mom when I told her this was the first blogger event I’ve been to and not got plugged ducts.

2. I love working with a brand I believe in
Reusable nappy company Bambino Mio was my sponsor for BritMums Live! and I loved rocking their logo on my badge, telling people about them and tweeting my thanks for their support. Working with them gave me the motivation to make a video about everything you need to organise a cloth nappy changing station so I’m glad to have done that. I genuinely love using their products so the relationship was a really natural one. It’s made me reflect on how I want to interact with brands on Circus Queen. I always want any partnerships I take up to be beneficial for my readers. I won’t BS you.

3. I’ve still got mixed feelings about Google +
I was a lot more careful this time about not overbooking myself so only went to things that really jumped out at me. I’m just beginning to build my profile on Google + but just haven’t had to the time to properly devote to it. The message I keep hearing about it is mixed and let’s just say that my feelings about still are. There is a lot of frustration around how it all works. I’m just not convinced yet of what it will do for me as a blogger and as an individual. Are you on it? Are you getting much from it?

4. I want to do more video
I went to a session on Youtube run by Christine Beardsell and while I don’t think I learned anything new, it reminded me again that I really want to do more video. I spend a lot of time looking at videos on Youtube, especially when I want to learn something new and I just think there’s a lot of Circus Queen stuff that would translate better into a video than a text-based post. Take a look at Circus TV, if you’d like to see what I’ve done so far and give me some feedback. If you’re on Youtube, my channel is CircusQueendotcom.

5. I am both broody and scared of the newborn thing
The babies! It’s not good to be away from my baby when I see other babies. There were lots of beautiful little babies snuggled up to their mothers in stretchy wraps or other carriers. I had to include a picture of Bump2Basics with hers. A babywearing image is becoming a requirement for my coverage of blogging conferences. So, yes, I’m a bit broody. But I’m also terrified of going back to that stage where they need you SO much. It does not help that, after he retweeted my breast pump request, I read Mutterings of a Fool’s post, Frustration.

6. Less is more
I had a lot more conversations at Cybher but I’m terrible at making small talk and that’s all there was room for. I’m so glad that although I didn’t meet as many bloggers this time around, I was able to have much more focused conversations. It was much less stressful so a lot more fun. Thanks for the meaningfuls Inexpert Crafter, I’m counting UFOs, WAHM-BAM, Bump2Basics, MsXpat and Circus Mums.

I have a muddled relationship with consumerist culture. My husband works in advertising, after all. I loved leaving with all “the swag” but if I take a step back it does seem a bit much. That hasn’t stopped me from sorting things into gifts and keeps though. My favourites items were The World Atlas from Barefoot Books, lolly makers from Crocs (needed somewhere to put that breast milk pumped at the conference when I got home) and a photo session with I Carried a Watermelon.

8. Semi naked waiters don’t do it for me

9. I do not miss London Underground

I’ll spare you the details because they’re so boring. It took me an hour and a half to complete what should have been a 20 minute journey. The bright side is that I got to chat with Thinly Spread who was also heading back West.

10. Reuniting is the best bit

I walked into the car park at Bristol Temple Meads. Laurence and Talitha were in the back seat. I’d left early because she’d been so fussy. When she saw me her face lit up in an expression I’ve never seen before. It was the look that can only be translated as unadulterated love. I hope I never forget it.

Changing my blog’s name from Circus Queen to Beautiful Tribe

Ten tips for taking a baby to a blog conference

The blog is changing!

10 things I learned at BritMums Live!