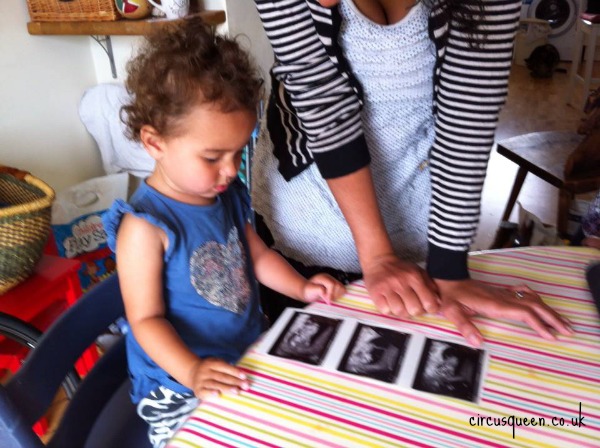 Yesterday we went for our dating scan. It’s funny how these ultrasounds have become pregnancy landmarks now that they’re routine on the NHS. We opted to have one (interestingly, I think many people don’t realise you can opt out) but declined Down Syndrome testing just as we had last time. When I was pregnant with Talitha, we actually had the scan at 10 weeks so waiting until 12 weeks this time felt like ages.

Our roles were reversed this time. I was calm and not giving it much thought but Laurence was actively worried. With Talitha, I panicked that they’d find an early missed miscarriage or that I was having a phantom pregnancy (ever the active imagination) while it wasn’t quite real to Laurence.

Then all of a sudden, there was the outline of a baby on a screen. A real baby. Flipping over and over. Kicking madly. An active, perfectly formed baby. I realised that despite all the changes my body has been through in the past few months. The small bump, growing breasts, sore nipples, the exhaustion, the queasiness… It hadn’t quite hit me that there really is a baby growing inside me. That we have children, plural.

Although, speaking of plural, I have to admit that I’ve been getting so many multiples jokes from friends that I would not have been altogether surprised to see twins in there but no, there’s only one and Laurence jokes that he thinks it’s a boy but, really, neither of us mind. We’re just happy to be having another baby.

After going for a drink to celebrate, we went home, excited to show Talitha the pictures. She was interested at first, then sort of looked confused. I think she thought the three pictures were three different babies. I was sorry that they weren’t quite as clear as hers were. Hers were just so obviously a baby whereas we had to sort of explain to her what she was seeing. She soon lost interest and pushed the images away, saying: “I don’t want it!” Hopefully not an early opinion of her new sibling!