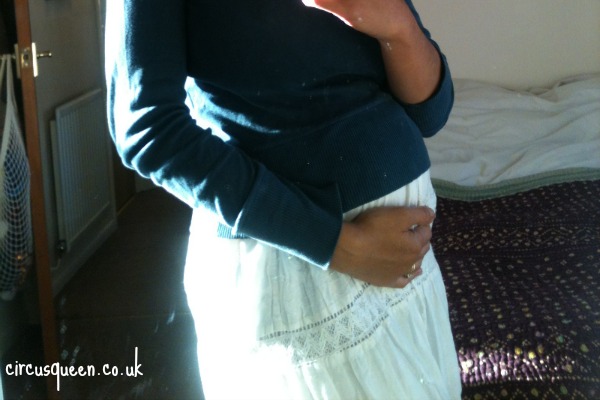 I’m 17 weeks pregnant now. I can hardly believe we’re that far along. Everyone told me pregnancy moves faster the second time around when you’re distracted by your older child. I thought I’d still be sat, wishing the time away – I’m such an impatient type.

As it turns out, I’m not doing that at all. The primary focus for me is the day to day stuff. Autumn is upon us and there are lots of lovely crafts and activities I want to do with Talitha. I get so excited about this season anyway but seeing the world change through her eyes makes it almost sacred. And then there’s Christmas, which I’m already putting things aside for.

When I do remember we’re having a baby early next year, I start thinking about how I need to get more organised with sorting the house so everything doesn’t fall totally apart like it did last time. I don’t have the mental space to think about what the new baby might need and, actually, I’m not sure they need much of anything.

From time to time I remember that I want to look for a doula. We need to sit and do the maths on that but we both really think it would be a good idea. We’d like to have as calm and positive a birth as possible, whatever ends up happening.

I wanted to go to pregnancy yoga and hypnobirthing classes but that’s just not looking like a financial possibility. I’ve just got my maternity exemption card though so hopefully I’ll be kicking my butt into gear for some free evening swims.

I have, however, been shelling out to see an osteopath. If you followed my last pregnancy on this blog you might remember that SPD was a prevalent theme – symphysis pubis dysfunction. It meant I approached trying to conceive again with a dose of fear. It often gets worse in subsequent pregnancies, kicking in sooner. I just couldn’t fathom dealing with that pain and having to look after Talitha at the same time.

Having spoken to a friend who found the Pelvic Partnership (love the name!) and a private physiotherapist who really helped her, I decided to see an osteopath with experience treating pregnant women. Cranial osteopathy had been so successful for helping Talitha with many discomforts.

From the start, she pointed out the obvious. My pronounced scoliosis was affecting my hips and therefore my pelvic pain. It could only get worse once pregnancy threw the hormone elastin into the mix. So the key was to start correcting problems sustained in my body for years which actually had nothing to do with pregnancy.

So far so good. A few treatments later and I have had touches of pelvic and lower back pain from time to time but a rest has alleviated them which wouldn’t have happened last time so I’m hoping that means all is in better shape. My back was in a bad way last week because of my own stupidity in pushing myself too hard with a hill climb the other day but at least it’s not SPD related. This is the one thing I feel I need to keep investing in. Pregnancy does not have to hurt.

Also, these issues could well have impacted on my long, start-stop labour last time as Talitha was just not in the right position. If there’s a chance of preventing that from happening again, I’m all for it.

PS: If you are pregnant, I’m running a giveaway right now – you could win a pair of maternity tights from Daylong.