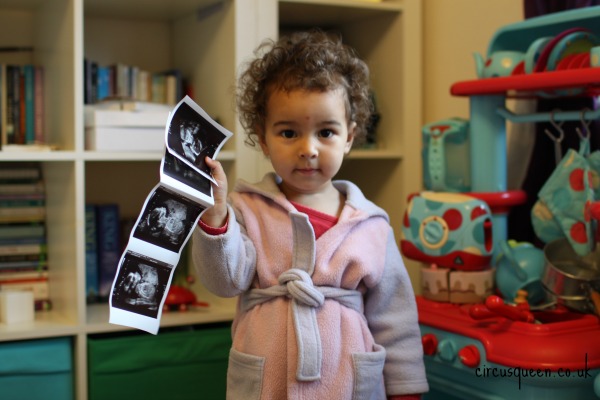 As we rocked up to our 20 week scan, I turned my thoughts of finding out the baby’s sex and making sure we had the money for pictures. Obviously, I know that scans are a medical affair, not for entertainment purposes but it’s more comfortable to focus on these details.

Who wants to consider that a scan could actually bring to light a serious health issue? I only allowed that idea to buzz around in the background. For one awful moment, when the jelly was spread on my bump and the sonographer’s instrument pressed down, I panicked that we would find a baby without a heartbeat. I’ve not felt the baby move much recently but then, at this size, that’s hardly unexpected. I’d insisted we not take two-year-old Talitha just in case the ultrasound did bear difficult news. I’d want to process something like that first.

Everything, thankfully, looked fine. At the end, the technician asked if we had any questions, which I thought was a bit weird because I’d been waiting for her to ask if we wanted to know the sex. But then, I suppose it’s refreshing in a way that she’d not assumed we did. Of course, little baby had decided it would be smart to cross her legs so we couldn’t see.

Generously, the technician offered to take a second look after I’d been to the loo, which did the trick in getting her to move. A girl, we were told, reluctantly. She got all up in the baby’s business, had a good proper look – as did we – and said that what we saw looked like girl parts and there was nothing that looked like boy parts. Still, she was cautious not to say it unequivocally, which we’d expected as the last time round they did the same. So we did the thing of walking around saying it’s a girl but also open to being surprised, which we’ll probably do again though we’re fairly certain she’d not say anything if she wasn’t sure.

The funny thing is, whereas last time I was so convinced I was having a girl, this time I really thought I was having a boy. For a start, I have a younger brother so, by that scientific estimation, I predicted Talitha would. Secondly, when I first found out I was pregnant, I really liked the idea of raising sisters so actively had to get my brain into the mindset that it could be a boy. Now I’m readjusting. And finally, Talitha’s kept on telling me the baby is a boy. Her reasons are equally scientific: 1. Peppa Pig has a little brother, George, 2. Mummy’s a girl and Talitha’s a girl, Daddy’s a boy so the baby’s a boy and 3. All the children in the books we read have little brothers. I still don’t think she believes me when I tell her she’s having a sister.

So my response to the news wasn’t quite the same but after getting over the ridiculous disappointment of not being able to use the brilliant boy’s name we’d chosen (I won’t reveal it yet in case there’s a surprise come birth) I was fully with it. We’re having a girl. Not that it matters. But it’s nice to know. Know-ish.