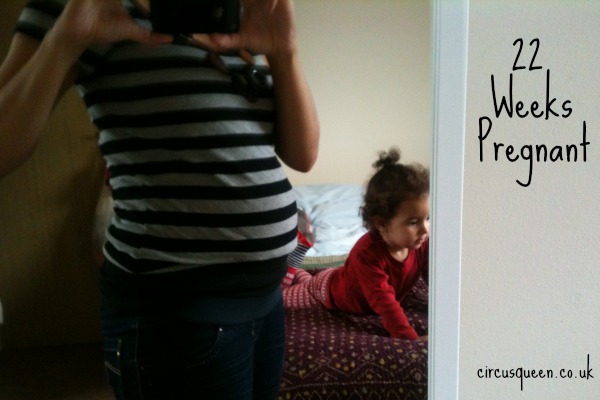 “Hello, baby,” Talitha says to my bump, “Having a nice day?” She catches me off guard every time. It’s not something I’ve taught her to do but I suppose she finds it natural to include the baby in our day-to-day lives as it becomes an obvious presence, i.e. I grow bigger.

Often, I find that she is the one to remind me that the baby is there. I am caught up in life with her. There are so many things happening. Her language continues to leap, she’s become obsessed with letters and their sounds, she’s potty training (successfully this time!) – it’s all more dancing, more walking, more collecting, more helping, more doing-it-myself, more, more, more! I don’t know how she finds the time in the busyness of her toddler brain to remember to ask her baby sister whether she’s having a nice day!

I’m not in complete denial, though. Little by little, we’re starting to put some plans in place. We’re going on a course at The Hypnobirthing Centre with Katharine Graves in London on the weekend. I’ve mentioned before that this was something I wanted to explore but we just didn’t have the funds to do it so I’m really grateful that Katharine has offered for us to come for free. I will be blogging about it as well as reviewing and giving away a copy of The Hypnobirthing Book

and CD soon. I think Laurence is really unsure about what to expect with hypnobirthing. He is wonderfully supportive though.

We also have an interview booked with a doula next week. I decided against a doula last time as I felt we’d have too many people in the room but this time we feel that having one is a good option for us. We hope a doula will take some of the pressure off and give us the support that overstretched NHS workers were unable to last time around. The one we’re meeting also does placenta encapsulation, which I’m really interested in having.

A friend who recently moved house generously gave me her baby clothes. It’s been so exciting sorting through them! We actually don’t have many girls’ clothes for the first year. Not that it matters but I remember slightly wishing that Talitha was wearing something to hint to onlookers that she was possibly not a boy. Mind you, once when she was a mosquito-bitten six-month-old out in Trinidad, she was wearing the frilliest, pinkest, floral sun hat you can imagine and a passerby still called out: “Oh, oh! Look de poor lil boy! He face bite up!” Ah well. It’s exciting looking through new (to us) things, anyway! Talitha loves it. She keeps putting things in the drawer for me and saying: “This one for the baby.”

I’m getting lots of kicks now. I feel like this one moves more than Talitha did and is more nocturnal but, in truth, I can’t really remember, even though it wasn’t that long ago. I’ve tried to help Talitha and Laurence feel the kicks but they can’t yet.

We’ve pretty much settled on a name. With Talitha we’d known from long before that that would be her name. This one has taken longer and involved more discussion but in the end, we’ve gone back to the first name we both liked and, now that we’ve agreed on it, it feels like hers. Unless when she’s born, it doesn’t!

The thing about thinking about a name is that it becomes real that we aren’t merely adding to our family or giving Talitha a sibling. We’re welcoming a new person into our lives – one who will change all of us forever. I’ve been reading a fantastic book, Seven Secrets of a Joyful Birth

by Dominique Sakoilsky. I really wasn’t sure about it at first but now that I’ve read it, it’s given me so much perspective, not just on pregnancy and birth but on life and all its transitions. It woke me up to the reality that this isn’t just more of the same. I may already be initiated into motherhood but I am now moving into motherhood with this child.

“But, within motherhood we will have the delight of exploring a new aspect of ourselves, and we cannot fathom what that might feel like until we are there, and even then it will continue to change and evolve. The only thing we can do, therefore, is to ready ourselves as best we can to be able to embrace these changes and allow ourselves the space and freedom to find ourselves where we enter motherhood with this child. Every child is unique and each can teach us new things about ourselves as women, as mothers, as parents.”