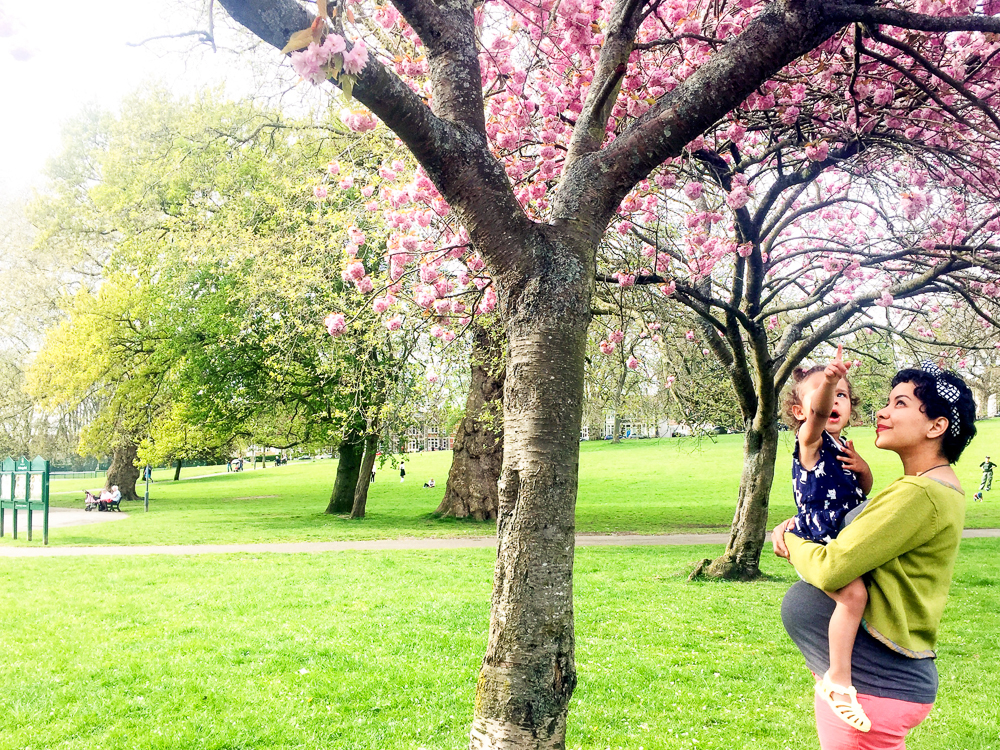 We’re down to single digits now in terms of weeks. So, on one hand, two months feels like ages but, on the other, that’s quite soon, especially when I pause to consider how much is about to change.

I actually feel pretty amazing compared with my last two pregnancies. In fact, I keep forgetting how pregnant I am until someone mentions that I’m huge. I wind up making plans that seem perfectly reasonable at the time and maybe not so great afterwards.

Because I’m tired. I feel energised and like I can do anything between 8am and 2pm but suddenly this strange, chemical exhaustion sweeps over me from there on.

Still, even with a bit of a stiff and sore pelvic girdle, I’m not in agony changing position in bed and I don’t have to plan going up and down the stairs as carefully as I did by this point last time.

I wonder if part of it is that I just have to get on with things. Or maybe it’s all those postnatal osteopathy sessions from last time. Or maybe it’s that Ophelia is walking a lot more than Talitha was even at months older than she currently is. She’s definitely encouraged by having a big sister but she also just loves to be on the move. Or it could even be that I can drive this time, which means I’m not walking (or running after trains and buses) as much. Pros and cons to that last one.

In some ways I feel healthier in this pregnancy. I’m more aware of what I need to eat to feel good, two kids means I have to keep moving, I’m a lot more disciplined about going to bed on time even if I could be more so and now that the cloud that’s been hanging over me for most of this pregnancy is lifting, I’m able to think more productively and take more action to protect and feed my inner life.

I mentioned being low on iron and deficient in vitamin D in my 28-week pregnancy update. I’ve increased my over-the-counter vitamin D and have made more of an effort work it into what we eat since. We also have had so much more sunshine recently, which has felt glorious. Don’t we all feel differently moving out of winter?

I tried taking the iron prescribed for me by the GP but even though it was a relatively low dosage and a syrup meant to be gentler I just found the side effects too unpleasant so have gone back to taking iron-enriched water and focusing on iron in my diet too. I feel like both changes have had an impact and while I’m still tired, I’m not feeling desperate most of the time.

That said, Laurence is working away in London at the moment. He’s coming back on the weekends and I know it isn’t a lot compared to what many have to cope with but it isn’t our normal and it’s made me realise just how much I rely on being able to just wander into the kitchen on an evening and catch up, having a second pair of hands picking up the house and another nighttime parent for when one of the girls wakes up.

I’m waking up a lot regardless. Baby movements, needing to wee at 3am or just feeling hot, I’ve moved into the stage of pregnancy where my body is getting ready for erratic newborn sleep. Funny how it didn’t occur to me last time that sleeping well during the last trimester indicated that Ophelia was a sleeper.

In fact, I kept waking her every two or three hours after she was born, concerned that she get enough milk (I so didn’t want to have another low milk production situation) until her prodigious weight gain and the fact that she started refusing to wake up to feed stopped and reassured me. Not so with this one. I’m pretty sure this baby is a lot more like her eldest sister in terms of waking. Certainly, she seems the most active of my babies. It’ll be interesting to see what it all means, if anything at all.

We’ve reached a place where we’re fully looking forward to meeting her. In that respect, two months feels a long time to wait. I’ve started imagining holding her, feeding her, wrapping her in a sling, seeing the girls with her, watching Laurence carrying her little body skin-to-skin. He’s said too that he’s excited about her which has been beautiful to hear when it’s taken both of us a while to wrap our heads around the idea of having a third child.

Funnily enough, I now feel like we were always meant to be a family of five. And that we already are.

Read more updates from this pregnancy with baby number three: