5 Ways to Save Time with a Newborn 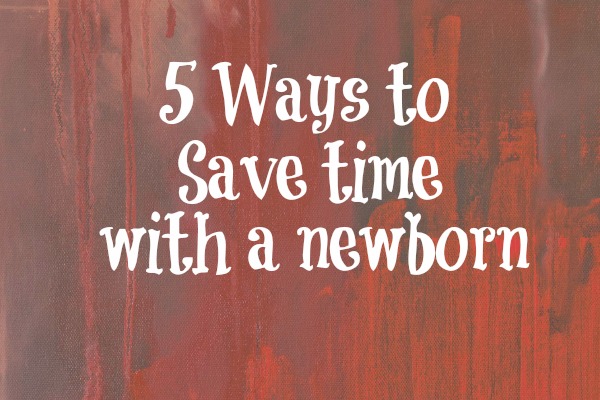 Laurence loves to wax lyrical about the Jetson future to which we’re headed.
Just the other day he was telling me: “Soon, your smartphone or tablet is going to link up with the contents of your kitchen cupboards and tell you what’s in there.”
“But why would I want that?” I argued, “Shouldn’t I just get off my lazy arse and go see what’s in them?”
“What if it were me ordering groceries at work?” he countered.
Obstinate, I huffed: “Just wait until you get home. That’s all.” Then I went off on one about how I’m the one who does the shopping anyway.
Of course, he’s right. It would be faster, more convenient, more efficient. It’s like me arguing when we first got married that dishwashers were pointless and lazy, and now I never want to live without one.

On the countdown to having a new baby in the house, we’re thinking more and more about how we can save time on the less than thrilling tasks so we can generally have a less stressful time postnatally.

1. Batch cook and freeze
I told myself way back when that I was going to do this but I’ve surprised myself by actually doing it! A few times that I’ve cooked recently, I’ve made enough for that night’s dinner and an extra dinner as well as for Laurence’s work lunch the day following each. It’s definitely been something of a domestic triumph for me. Well, a bit less triumphant when we’ve ended up defrosting a meal because I’ve not cooked out of pregnancy exhaustion or forgotten to do the shopping but still, we currently have a freezer full of wholesome yum!

2. Make the most of apps
As you can probably tell from the opening to this post, I’m a bit of app-phobic but that’s something I’ve had to get past because having an iPhone has genuinely made my life easier, especially since I recently upgraded to the 5C and added an iPad to my contract. I try not to spend too much time looking at screens when Talitha’s around (I’m better some times than other times) but doing something really quickly on there allows me to return my full attention to what we’re doing and be really present with her.

So I was intrigued to hear about Hive Active Heating™. It combines a wireless thermostat, a hub plugged into your broadband and a receiver installed close to your boiler, letting your control and monitor your home’s heating through an app on your iPhone or android. So if you’re stuck on the sofa with a baby or left the house in a mad rush with your children (why does it always feel like a mad rush – is that just me?) you can easily manage your heating control and hot water schedule.

I totally underestimated how stuck I was going to be breastfeeding a newborn last time around, even more so when our specific problems arose, and I just didn’t prepare. The result was that everything felt wildly chaotic. I was always going upstairs or downstairs for something or other or just going without. If it was something for the baby, it got done. So, nappies yes. But if it was for me. Well, it felt too much. So, I ate barely anything all day long.

While I’m sure slings will help a lot this time as I’m now a confident babywearer, I still expect a bit of not being able to move around so easily. So I’ve been busy gathering one-handed snacks. My nappy station is sorted. I sussed this one a couple of years ago with Talitha’s nappies in our old place but you might still find our nappy station video interesting. I’ve also set up a nappy station downstairs in a box that Talitha can reach. Also within reach are her puzzles, toys, crayons and other quiet activities. We’ve moved the rocking chair downstairs and it has great pockets on the arms for storing water bottles and snacks, which we’ll be sharing. I also have a little basket upstairs for water bottles and snacks should we end up up there and needing them.

I still have a way to go on this but I’ve got so much better at keeping the house tidy recently. I mean, I don’t panic every time someone wants to come over and visit! Sadly, I’m scared that this is all about to fall apart. So, I’ve been putting together a little plan of action. Forget the first few weeks. Whatever happens, happens. But after that, I’ll have a very simple cleaning rota which includes the bare minimum of what needs to happen for the house to be habitable and hospitable. I’m thinking of setting the egg timer for 20-30 mins and just kicking the day’s tasks in. I also fully intend to use the trick where you gather the mess all into a laundry basket and banish it behind a closed door!

5. Get your children involved

OK, I realise this sounds like the opposite of saving time but bear with me. We’ve been including Talitha in household tasks for a while now. When she was crawling, it was putting the contents of the veg box away. Now, she feeds the cats among other things. Yes, it means these tasks take much longer and don’t get done as well as I’d like but to her, it’s play and so it means that we’re getting two things done at once. We’re passing time together enjoyably while getting through things that need to be done every day. So, it is efficient. We plan to keep this up when the baby comes as I know it will make such a difference to her and to me.

Over to you, any other time saving solutions to throw my way?