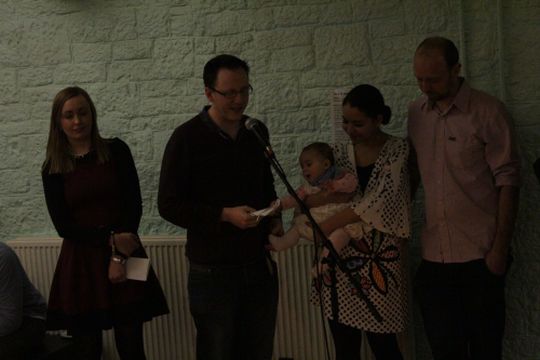 I’m over at Mother’s Always Right today with a guest post, “5.30am is not morning”, go check it out and leave some comment love, why don’t you?
————————————————
Over here, I’m thinking about my daughter’s dedication. We went to a dedication yesterday for another baby girl we know, so it’s on my mind.

What’s a dedication? It’s kind of like a christening, I guess, except the thrust of an infant baptism (as I understand it) is to make a statement of belief on behalf of the child, with the intention to raise them in the faith, confident that they will one day claim it as their own.

I see the value of some of that but, generally, baptising babies just doesn’t sit well with me. Talitha will one day reach an age of reason and it is for her to decide where she will walk and with whom. So, instead we dedicated her.

Really, as I see it, we were doing two things.

One was to promise to pass on our faith, a living heritage that runs through us so completely anyway that it cannot but affect our parenting.

The other was to pray that she would come to know the love of God so fully that it would change everything – for her and for the people who come into her life.

Maybe, as a third, I’d also say that we were thanking God for the blessing that she is to us.

And as a fourth (I’m really not doing well on this “two things” declaration), we were inviting our friends and family to join with us in helping her find where she stands in the world.

As her godparents prayed for Talitha and for us as her parents, and as Talitha tried her hardest to grab the paper their prayers were written on so she could eat it, I was struck by the reality behind the symbolic act we were participating in.

I cannot pass on something that is absent in me. So often I struggle to find God in nappy bin. Between playing with stacking cup and vacuuming I wonder about His presence. In the monotony of motherhood I often pause to find myself spiritually dry.

Yet the longing for more never leaves. I suppose it is this longing that I will pass on to my daughter regardless of what I do or don’t. It holds secret power. I’m still working out what for.