A room for two sisters 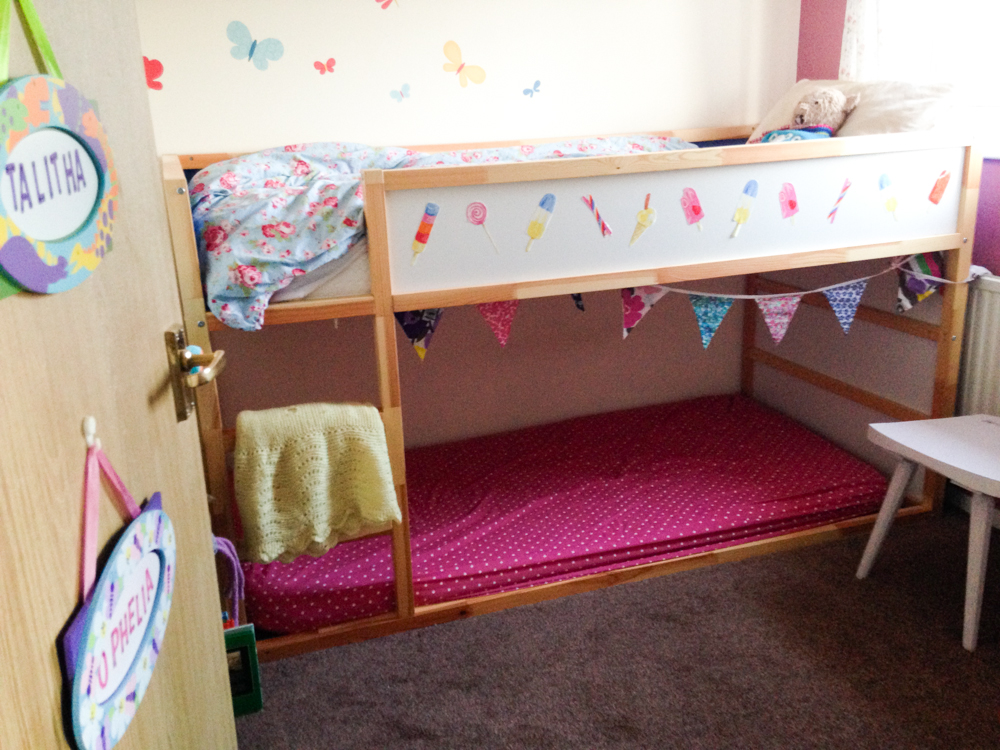 Ophelia is going to be one-year-old in a week and a half. I know. I can scarcely believe it either. Talitha has been desperate for her to move into her room like we said she would. Well, their room. Maybe she just wanted to put up the sweet name plaques my mother got them for their door.

Ophelia has spent most of her evenings in arms but we recently started putting her in a travel cot in our room for some of that portion of the night before we all get into our bed. She’s easily disturbed now and a bit of a lump so it’s felt like time to get her to bed rather than just asleep at bedtime.

We converted Talitha’s bed into a half bunk and moved her mattress onto the floor for Ophelia. Talitha has a new mattress Dormeo sent us to review, which she’s been thrilled with. It’s Memory Fresh single – memory foam and unbelievably comfortable.

Our bedtime routine often involves getting into bed with her, which used to be a real pain because the mattress she had before really wasn’t up to supporting an adult’s weight. Now we have even more of a problem than we already did of falling asleep while putting her to bed!

The only downside is that the single runs a bit smaller than expected. It doesn’t fit the bed perfectly, which isn’t a problem for us but it’s worth double-checking the measurements before you order, just in case. We’re happy with it otherwise.

So far it’s working really well having Ophelia in a floor bed. It means that I can feed her to sleep and slip away without worrying she’ll crawl off the bed. When she wakes up she usually just stays sitting there, crying until I come to get her (Talitha’s a heavy and motivated sleeper now so this isn’t a problem).

If she does have a wander, it’s straight to the stair gate to make her complaint known. But we have an ear out so it’s not a problem anyway.

At first I thought we’d have to put another set of drawers in this room to store both girls’ clothes but then I realised they just had too many clothes so we had a major cull. The cloth nappies live in the study, though.

This room is far from finished. We still haven’t worked out the perfect book storage solution and two of the walls are waiting for ideas. We’re having fun with it. Talitha loves taking her friends up there even though there aren’t really any toys here other than teddies!