And then the cows danced 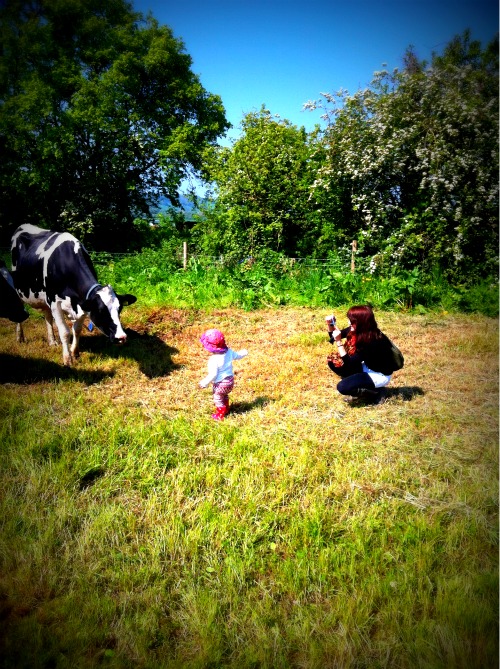 It was 6.00am when I slipped out of bed. Talitha and Laurence lay beside each other, so alike when asleep. The taxi would be here in half an hour. I hoped she would sleep until then but my morning time imp sensed I’d left the usual spot and reached out for a moment as if for a breast. When she did not find it she woke up smiling and gurgling.

8.00am, our usual waking time found us at Worthy Farm in Glastonbury, looking at cows in their winter shed. All was calm and vaguely sleepy. Talitha, strapped to me, could not be less interested. Cows. So what?

Then we went out into the vast field. I imagined the festival I’d seen so many times on television. The crowds, music and mud were replaced by stretches of green and an atmosphere of quiet expectation. We were waiting for magic to happen.

And it did. The moment the gates opened we knew it. The sound was extraordinary, a type of music. It was like some lowing hallelujah. Then the cows came bounding out, skipping, leaping, you could say, dancing. Yes, I could see why they called this the cow dance.

Spot Talitha and me!

We were watching something that happens all over Europe when cows are brought into the outdoors for the summer. I’ve never seen cows behave this way. It was a real privilege to observe it.

The invitation to come see the cow dance came from the World Society for the Protection of Animals (WSPA) as part of their “Not in my cuppa” campaign. They’re working towards preventing industrial-scale dairy farming from coming to Britain.

In that kind of set up, cows would effectively be battery farmed. They would spend their lives mostly or completely indoors and milked around the clock. Apart from the inevitable health repercussions for the cows, it’s just difficult to imagine such sociable, happy creatures not getting the opportunity to experience what we witnessed that morning in Glastonbury.

The dancing cows at Worthy Farm are so clearly loved by their farmers. We got a chance to chat with Michael Eavis who owns the farm and founded the festival. His passion for what he does is obvious. It was a treat meeting him but I admittedly was as taken with his 11-month-old grandchild, Talitha’s age, whom he brought over to say hello. Babies always steal the show.

I was invited along with Christine Mosler of Thinly Spread and Jess of Mum2babyinsomniac to think about what the shift to factory farming would mean for the milk that our children will drink in years to come. Talitha doesn’t drink cows’ milk but dairy products do feature in our household and in her diet.

Of course I’m concerned about the quality of the milk that goes into our food but the quality of the life for the cows that produce it is what I can’t get out of my mind. We’re talking mastitis, stress, premature death – just cows not getting to live, essentially, as cows.

I grate cheese over Talitha’s pasta and can’t divorce the food we’re about to eat from what could become a harsh reality in this country. It’s happening in the US and in parts of Europe. It must not happen in Britain.

So I signed up to the campaign online, joined the Facebook page and followed WSPAUK on Twitter. Then I reflected on a morning spent with my daughter, watching the cows dance.