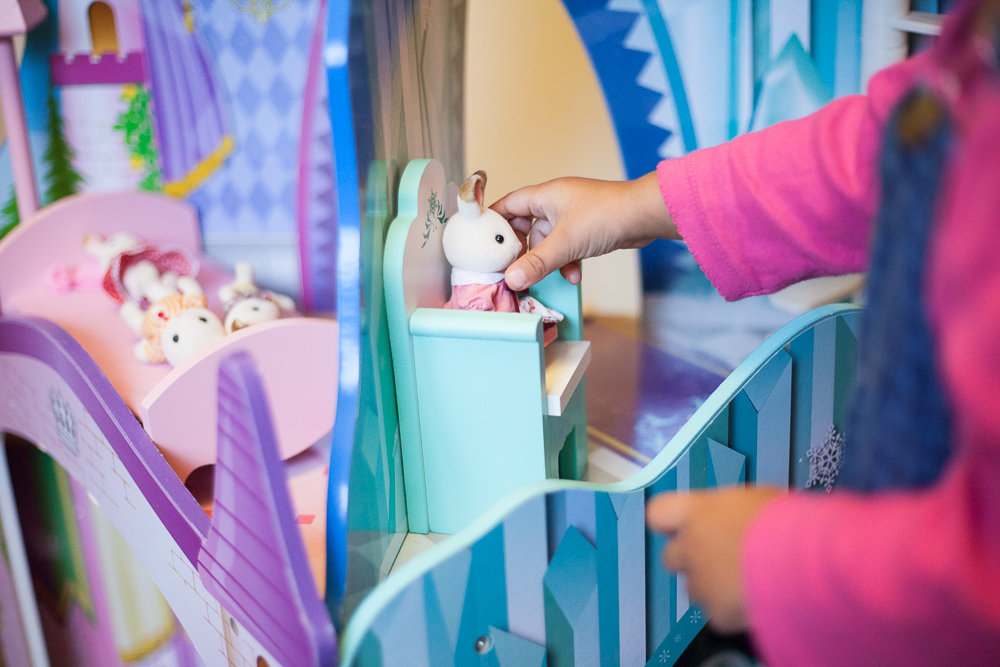 Argos has revealed their top toys for Christmas 2015 and we were one of their toy testing families. We chose to try out the Chad Valley 3 Storey Summer Winter Dolls House.

Talitha immediately made the connection with Frozen and said it reminded her of Queen Elsa’s ice castle. In fact, her Elsa plush doll and Sylvanian family rabbits moved right in. This house is actually sized for Barbie-sized dolls, though, I’d say. We were toying with the idea of giving her a Lottie doll, which would work well in this house.

I think we were all a bit blown away by the size of this house. It’s taller than both of the kids and is two houses in one, a summer house and a winter house. I had my misgivings about how big it was but the girls loved that they could play their own games alongside each other, without getting in each other’s way. OK, my four-year-old may have been the one particularly appreciative of this.

It was pretty straightforward to assemble, though be aware that it may not be an item you’re going to want to have to take apart once it’s up. Quite a decent bit of furniture comes with it, which requires no assembly. I like that it’s wooden. I’d really rather not have too much plastic fantastic in the house. The colours are pleasing, too, where many kids toys can be quite garish.

The house arrived at the beginning of a week stuck indoors with chicken pox and it couldn’t have been better timed. The girls have had so much fun with it, coming up with new games each time. Talitha has even made some more furniture for it, including a bath.

When choosing toys, we try to find that happy medium between what the kids will go ga-ga for and what we’d be pleased to walk past each day. Toys need to have a longevity, rather than being a thrill-of-the-moment item which will be forgotten in a week’s time. Sometimes the “educational” factors in but all child’s play involves learning so it’s not something that worries me too much. A toy that works for both kids definitely gets extra points, especially if it’s a big item like this one.