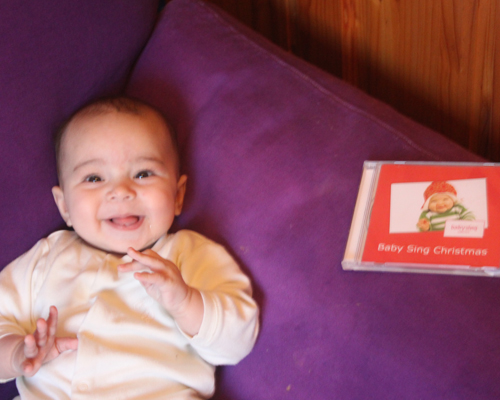 I know it’s too early for Talitha to know what’s going on but I’m really looking forward to celebrating her first Christmas.

I’m already imagining showing her the lights blinking on the tree, reading her the Nativity story and watching her get more excited about the wrapping paper than her presents.

A Christmas post in November? How commercial am I? I think it’s my trip home for the holidays that has got me in the mood (Trinidad is still “home”? That’s a whole other post).

So, as I pack my things and try to get the house under control so it’s not too depressing for Laurence for the week and a half that he’s without us, I’ve been listening to Talitha’s first Christmas album: Baby Sing Christmas. With her, of course, since it’s hers.

Like most babies, music lights her up. Unluckily for me, though, she sometimes gets overstimulated by most of the music I naturally like listening to, whether it’s rock or folk. Really, buzzed by folk music? C’mon, baby.

Luckily for me, this is baby music I do enjoy. Forget over-processed backing tracks and squeaky vocals, Baby Sing Christmas is simple and clean: acoustic guitar and a soothing voice.

It’s so chilled that she even fell asleep while listening to “O Christmas Tree” (I was taking a break from trying to get her to nap). Alas, this is the child who does not sleep so it never happened again but it was impressive enough.

It’s got all the classics we’re going to want to listen to throughout the season from “Silent Night” to “Here comes Santa Claus”. I can see this album getting played year after year in our family.

The album is produced by small independent record label Music for Baby aimed at supporting baby and toddler development. The music’s so gentle, I can see how.

I’ve come down with the Yuletide bug early so I’ve been playing it for Talitha almost every day for a week now. We sing and dance to it and she seems to find “Let it snow” particularly hilarious.

So, I’ve chucked it in the suitcase. Nana and Grandad, we’re bringing Christmas to you.

Now I just have to introduce her properly to parang…

This is not a paid post but Music for Baby did send me the Baby Sing Christmas album for review. Obviously, I’m not anything if not honest.