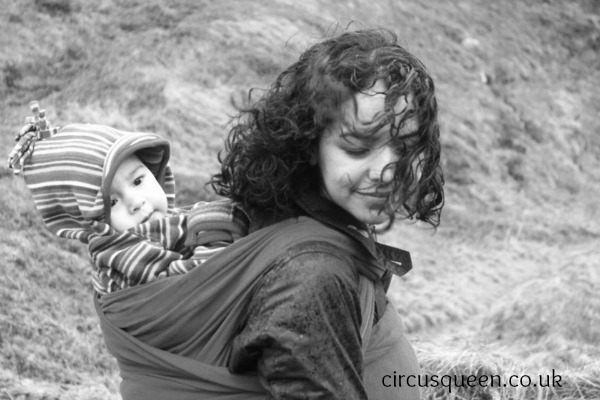 When the weather gets colder, babywearers across the forums and online groups start asking each other how they dress themselves and their babies for winter.

The standard answer is usually: a babywearing coat.

There’s no question that a babywearing coat is the ideal solution to the problem, especially if you’re back carrying with a woven wrap. It allows you to get everything nice and tight without the bulk of many layers between you and your baby, your body heat helps to regulate your baby’s and you don’t end up looking a little bit clunky like this…

Admittedly, this was just a bit of a clunky “double hammock” altogether since I did it in a hurry. In general, if you are going to wrap over this many layers, I think you’re better off with a “ruck”.

The reality is, though, that a lot of people, like me, won’t end up wearing a babywearing coat either because they don’t like the look of any of them, they want to keep their slings display, they have toddlers who are up and down, they have an older child who’s mostly walking or they just don’t have the money to buy one.

Last year, I just wore Laurence’s ski jacket and had Talitha inside it. This year, she’s too big for it and the scenario is just too frumpy for me to repeat anyway. So, I’ve put us in separates and learned a few things as we’ve gone along:

Avoid too much bulk
It is very difficult to wrap over a snowsuit. You can get away with it with a soft structured carrier, like the Ergo, but you’d still be better off with a coat rather than a suit.

I’ve used a fleece suit instead, which has been OK, but then I’m prone to going overkill in cold weather. Talitha is actually fine in just a jacket in cold weather and jeans over tights if it’s really chilly.

From the wearer’s point of view, it’s really annoying to have your coat ride up while you’re putting your baby on, especially if you’ve hip-scooted them on to your back. This is something Laurence goes on about every time he wears Talitha.

He keeps saying that babywearing requires a longer coat. I agree.

If the whole babywearing in cold weather thing is stressing you out, you might find that front carrying works better for you. With the right carrier, front carrying is totally doable. At 20 months, I can wear Talitha on my front for about an hour without discomfort in a wrap or a Wompat.

In that case, put the baby on first, then put your coat on and little legs will tuck neatly inside it.