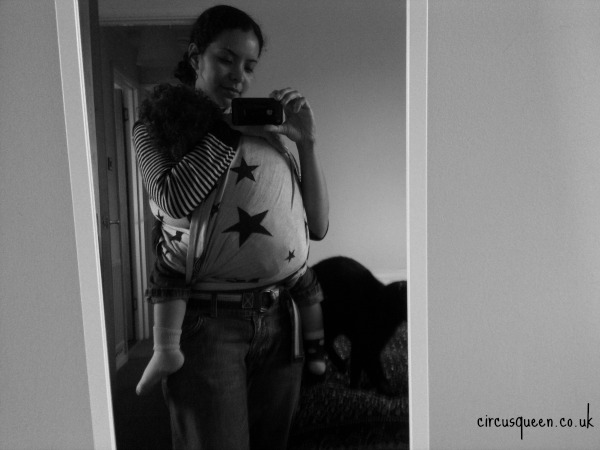 The night a pregnancy test confirmed that the exhaustion I was suffering was down to a new baby and I wasn’t in fact dying, we had to make a quick decision about whether to tell Talitha right away. I seriously considered Googling “tell two year old about new baby” to see what other parents had done but in the end we decided to just go with our gut instinct. It just seemed right to tell her.

I pointed out new babies to her when they arrived in church or came to our breastfeeding groups. When she saw heavily pregnant women, I explained that they had babies in their tummies just as mummy does. She’s even now met a newborn, having seen her mother pregnant. I explained to her the “big sister, little sister” dynamics of the families we met.

However, I think the thing that’s had the biggest impact on her is seeing tiny baby clothes. A few weeks ago, Laurence was moving stuff around in the loft when the bag with Talitha’s 0-3 months clothes burst open. So he had to bring it down. Talitha was intrigued. As we sorted them through, I explained that she wore these clothes and so would the new baby (she’d worn clothes of both genders). She announced that she would dress the baby and change its nappy. Hopefully that means that she won’t be in nappies herself by then!

She now insists that she’s not a baby anymore. She’s a girl. Maybe this would have happened anyway but I feel like it’s connected with the new baby. When I ask her if she’s a baby, she tells me: “Talitha not a baby. Mummy has a baby in Mummy’s tummy!”

Suddenly, she’s insisting on walking more and on dressing herself more. She often wants showers not baths. I can see she’s growing up and I am glad of it. I’m a little wistful at times but things very much feel as they should be.

Yet, every now and then she does something which reminds me that she still needs to hold on to her babyhood a little longer and I’m glad of that too. She still breastfeeds even though my milk has just about dried up. It’s usually just for a few seconds unless it’s the sleepy morning feed. It’s as if she just wants to make sure it’s still there, available to her – and truly it is.

We’re still babywearing too. I needed to use the pushchair a bit during this first trimester but, honestly, that’s as difficult for me as having her on my back. Now that morning sickness and exhaustion are going, it’s not a problem to wear her. As I said, she often wants to walk but she surprised me today by asking not only to be carried but for me to wear her on my front, something we have not done for months and months. She promptly fell asleep.

As I cuddled her for a bit before laying her down, I thought: “You are going to be a great big sister. But you are also still my baby.” I just hope I can keep nurturing her independence as she grows up over these coming months and years but still remember to let her be a baby when she needs to be.