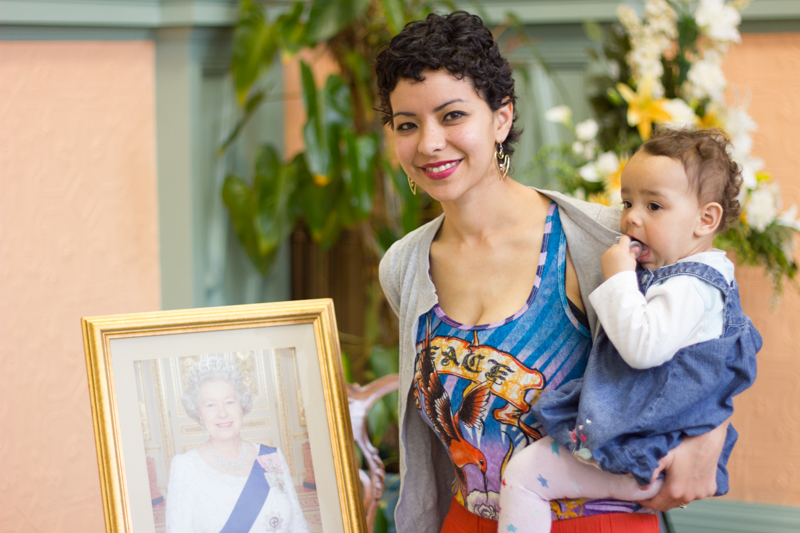 We finally did it, the UK and I. On Thursday we tied the knot in a surreal event that was not unlike a graduation or even a wedding ceremony. The mayor’s representative and a judge standing in for the Queen were both present (pictured below; the former is wearing a medieval robe and an 18th century hat).

There was a speech, there was signing, there was pledging, there was singing – singing of the first verse a national anthem that I can scarcely believe is now mine too. I’m still finding it hard to wrap myself around the fact that I am now legally British.

And yet the ceremony, so friendly and welcoming, made it clear that the 26 of us, from 17 countries, were now truly and equally British. There was nothing begrudging or condescending in this.

Laurence couldn’t take time off work so I asked my brother to come and I’m so glad he did, because I didn’t at all appreciate how formal and momentous this was going to be. I needed someone who’d remember to share this experience with (and to give me a hand with the kids – which I hadn’t thought about before either!).

Talitha was certainly impressed by it, though, especially by the medal – a gift from the city and county of Bristol to mark an occasion that deserved to be marked.

I hadn’t thought of it at the time but my brother said afterwards that what struck him looking around the room was that everyone had a story. Who knew what they were coming from? What journey had they taken to come to this point? Under what circumstances had they chosen to adopt this country as theirs?

In many ways, it’s been simple enough for me. I met and fell in love with a British man while I was studying here as an international student. We got married as soon as I finished my Masters degree. I got a marriage visa. Then permanent status. Then citizenship.

A ridiculous amount of money has gone into that process. We’re grateful to family for helping us with quite a lot of it. Not everyone is so fortunate and now that the rules around marriage visas have changed since we applied years ago, many are finding it prohibitive. There are Britons who are now finding that they have to choose between spouse and country.

Not that it was ever an aim of mine to stay here. I always expected that I would go back to Trinidad and Tobago. In the final year of my first degree, I actually considered applying to postgraduate programmes at universities in Canada or the States instead.

My hands unexpectedly shook as I read from the page my pledge to the Queen, her heirs, this land and its laws. I stumbled over the national anthem that is now apparently mine. I flashed back to school days singing the Trinidad and Tobago national anthem at morning assemblies, standing firmly at attention in uniform.

This is not a situation where I give up one identity for another. I am still Trinbagonian. I am proud of that fact. Yet it would be naive of me to pretend that something hasn’t shifted over the decade I’ve been in the UK, that my identity hasn’t expanded to embrace some new thing.

I went into that ceremony excited that I’d finally be able to travel more freely on a British passport and I left appreciating that this step meant so much more than I’d been willing to consciously acknowledge. I’m probably going to be unpacking it for some time to come.