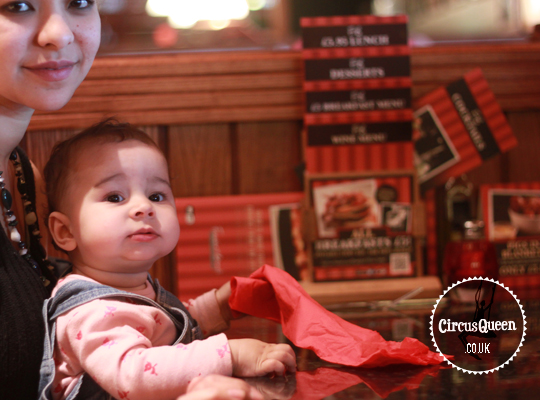 Saturday marked my 26th birthday so we decided to celebrate it on the Friday. Of course. I think, actually, Laurence quite fancied taking a day off. Either that or he forgot my birth date and thought it was the 13th when he was booking the day off.

Regardless, I loved that we had another long weekend together. That in itself was a birthday present.

So, my brother Liam and his fiancee Shalimar staying with us for a couple of weeks, we decided to all go out for lunch at Frankie & Benny’s at Cribbs Causeway in Bristol. I was sent a voucher so I could test drive one of their restaurants (they’ve introduced a new menu apparently) so that’s what we did.

Four adults and one baby, we were promptly seated. About fifteen minutes passed before we were attended – a noticeable though not indecent amount of time. When the waiter came, he was courteous, friendly and professional.

A high chair was fetched for Talitha – the kind that clips to the table. A glance and I wasn’t keen on putting her in it. It wasn’t food-ridden but it was a bit grubby. As soon as I mentioned it to the waiter, though, he quickly set about cleaning it. I still thought it could use a proper going over but it was passable.

We ordered our drinks, two white wines, a cider and a ginger beer, and settled into looking at the menu. We’d been seated with a kids’ menu too so I scouted for something baby led weaning friendly.

For a moment I got excited spotting a lentil stew suitable for seven months plus. When I realised it was a pre-packaged puree, not so much. So I ordered her a margherita pizza instead and no starter for myself. Of course it was too salty for her so I gave her the crust and let her tuck into a baked sweet potato I’d brought just in case.

This isn’t necessarily a flaw, mind. I don’t really expect restaurants to cater for her and I think if you’re spoon feeding, as most parents are, including some baby food on the menu is actually a nice touch.

Liam ordered a vegetable soup which he said tasted homemade. Shal said her pork meatballs had an weird texture but she wolfed them nonetheless. I kid. Shalimar doesn’t “wolf” things. She’s going to uninvite me to their wedding when she reads this.

Laurence went for jacket potato skins. Busy with Talitha’s pizza and noticing in quiet chagrin that she was rejecting my lovingly prepared sweet potato in favour of the crusts, I regret not doing my usual stealing a bit off his plate. Ah well.

On to the main course. The bro had a Louisiana hot wrap and chips which he was happy with. He called it the most satisfying meal he’s had at F&B and, since Shal lives practically round the corner from one in Guildford, they’re fully initiated F&B diners. She had a chicken and bacon wrap with chips, enjoyable but too much mayo, apparently.

Laurence had a calzone and I a burger and chips. As usual I had food envy so we shared. His dish was much better than mine. The burger was OK but the bread was too processed for me. His calzone was piping hot and tasty. I need to just let him order for me. He clearly knows what he’s doing. So, when dessert time came we agreed from the outset to share. All of us either had waffles or brownies. A yummy finish.

The atmosphere worked for us as a family with Talitha’s loud, happy yelps not bothering anyone. I felt it was a shame it was so dark when outside was so sunny though.

All in all, it was a real steal feeding and beveraging four adults for £54. We could have easily spent that feeding the two of us elsewhere. The service was pleasant. We were asked more than once how we were and courteously acknowledged when we were leaving.

That F&B is well-placed if you’re planning to nip to Vue cinema afterwards, which we did to buy tickets to see The Best Exotic Marigold Hotel. Apparently I am “old” to choose this over The Hunger Games. Tickets bought, we dropped Talitha home with Liam and Shal who’d offered to babysit and went back to Vue.

We went into the theatre shocked that the film had already begun, a mere eight minutes after the starting time. I kid you not, we sat there for at least 20 minutes thinking it must just be a really avant garde film until we agreed that we must have walked into the end of a viewing.

It turns out we’d been sold tickets to the next day’s viewing. To make up for it, we were allowed to go see The Hunger Games that night AND go see The Best Exotic Marigold Hotel the next. I know this has nothing to do with reviewing Frankie & Benny’s restaurant but let me tell you, seeing The Hunger Games was a BRILLIANT end to the day. Go see it.

Frankie & Benny’s sent me a voucher to spend at any of their restaurants.