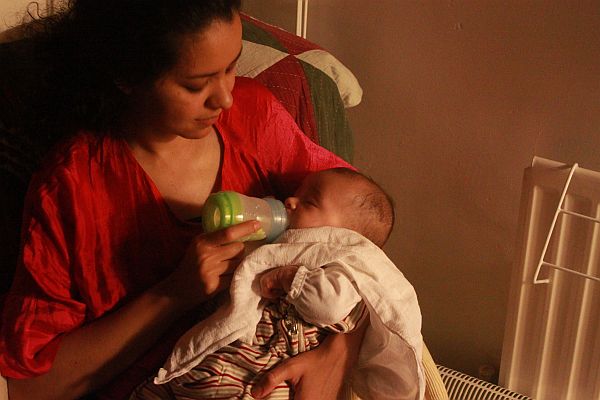 For all my determination to feed from the breast as much as possible, I’ve kicked it in with the supplemental nursing system. I’ll use it for the occasional feed but I’m mostly formula feeding* now and bottles have simply proven less stressful.

I’ll go into all the wherefore’s in another post for those interested in knowing more about life with an SNS. I still maintain it’s brilliant but have made the personal decision to mainly bottle feed.

It’s taken a long time but I’ve finally made my peace with the bottle, mostly anyway. A lot of this has come from realising that losing some of breastfeeding’s nutritional value doesn’t have to mean losing the bonding involved with it too. So, I’m taking some conscious steps to bottle feed with love.

1. Respecting physiology
When we first started bottle feeding, we were concerned about causing nipple preference. So we followed advice specific to bottle feeding a breastfed baby and have continued to do so. This involves respecting Talitha’s natural rhythms.

First, I offer her the bottle rather than just sticking it in her mouth. When she opens wide, I ease the teat in.

I hold her reasonably upright and the bottle kind of parallel to the floor (this become impossible when you get down to the last couple of ounces – that’s when we just end up tipping it). She takes in some air but I make sure to wind her properly afterwards. This means that she regulates how much she takes from the bottle rather than sucking and swallowing simply because of constant flow.

Every now and then I tip the teat upwards but keep it in her mouth. This mimics the let-down and pause of breastfeeding.

Half-way through, I switch sides so she gets the change of view that she would with breastfeeding. It’s supposed to be developmentally beneficial.

2. Maintaining close contact
It’s surprisingly tempting while feeding her to just zone out and watch TV or whatever. Let’s face it, it’s not the most riveting task in the world when you’re doing it at least six times a day.

But when we’re bottle feeding, I’ve felt it’s even more important that I try to reclaim the intimacy we could be losing.

So I’m careful to hold her close and look into her eyes. Every now and then I get topless, strip her down to her nappy and we have a skin-to-skin bottle feed.

I’m still not entirely sure what my thoughts and feelings are on this one. I kind of feel that having to give up breastfeeding exclusively shouldn’t mean that I am no longer the one who feeds Talitha.

A part of me wonders if I’m being silly here but another part wonders why anyone else should be feeding her when I’m around.

It’s confusing because I don’t mind Laurence doing the occasional bottle when I’m around (particularly if I’m completely wiped out and it’s the weekend). But when other people do, I get a funny feeling about it.

I’m working this one out but I feel that at least most of the time, I’ll be the one wielding the bottle, not just the one fighting up with the boobs beforehand.

What have you done to keep the intimacy if you’ve bottle fed? I’m really interested in hearing about others’ ideas and experiences in this area.

* I later discovered that this was not true. I was mistakenly supplementing more than was necessary. After cutting back I realised that thanks to domperidone and my baby becoming a more effective feeder, my supply had increased without me noticing. Ah, the joys and confusion of combination feeding!