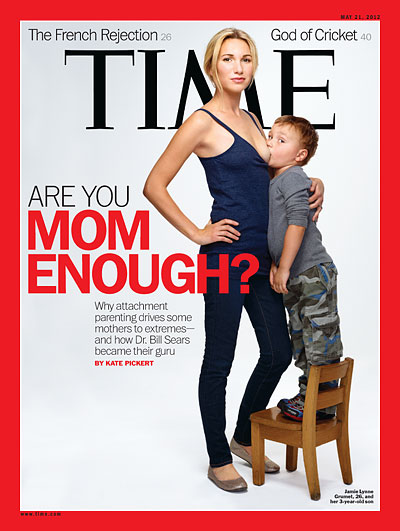 I was not going to blog about the TIME cover featuring a woman breastfeeding her three-year-old in an – shall we say – unconventional pose. I was busy with Yeo Valley and Cybher the weekend it erupted on to the internet everywhere. Then I was trying to survive the week with a sick baby and now that everything has calmed down, I can hardly believe that people are still shouting about this.

I was not going to blog about it because everyone was supposed to have moved on by the time I’d get a moment to join the virtual conversation. It is, after all, only a woman breastfeeding her child. Yet, it’s still on the radio, in the papers, on the television and, well, still all over the internet.

The usual suspects are calling breastfeeding beyond a year disgusting and perverse. While that’s not fine, it’s business as usual. Right or wrong, I’ve become numb to it. However, when people considered experts because of titles they hold or books they publish call it pointless and possibly damaging, and spout misinformation to support their opinions, other voices need to balance the discussion – voices like mine.

Talitha is eleven-months-old. For the next thirty-four days she fits neatly into the apparently approved time frame for a child to be breastfed. She breastfeeds between four and eight times a day for five to fifteen minutes at a time.

Weaning, by definition, is gradual. It is possible that she may wean from the breast by her first birthday but it’s highly unlikely. That’s not only because of how frequently she feeds or how short the time between now and then is. It’s because natural age for self-weaning is usually between two and half and seven. Of course this isn’t a rule but if a baby stops feeding suddenly before 18 months, it’s probably a nursing strike.

This is not to say that every mother must breastfeed for the WHO recommended two-year minimum or else they’ve somehow failed. I’ve noticed that instead of actually stating what harm comes from breastfeeding beyond a year, “experts” raise concerns over the pressure the idea of extended breastfeeding puts on new mums. I agree the headline on the TIME cover “Are you mom enough?” is meant to be incendiary.

But that’s beside the point. Should no one point out the benefits of natural term breastfeeding or indeed of breastfeeding at all in case they make someone feel guilty? Is the antidote to the “mummy wars” the media keeps trying to incite to throw a blanket of blindness over society? Surely, women are empowered to own their decisions to formula feed or breastfeed if they have all the information in front of them.

I am a woman who lives in a society where corporate giants spend £20 to convince me that there’s not much difference between my milk and something put together in a laboratory while the NHS spends 14p to encourage me to breastfeed. I am surrounded by advertising and by attitudes that have been shaped by that advertising. From before I conceived, I was under pressure to artificially feed my baby.

But what about when formula is no longer in the picture? What happens when she’s eating solid food and not so heavily dependent on breastmilk? What about when she’s got a full set of milk teeth, a full head of hair, when she’s walking and talking and, oh no, can ask for it? What then?

Every cut off point people mention seems so arbitrary. None of it seems to be grounded in biology. I can’t see how any of these things are reasons for me to stop her from breastfeeding. More than that, I can’t see why anybody else should care. I’m coming back full circle. Why does the image and idea of a woman breastfeeding her three-year-old bother people so much?

It’s partly because breasts in our culture are sexualised. No, that’s not it. That’s such a small part of it. It’s because women are viewed as sexual objects rather than whole people. A breast functioning as it’s biologically intended to is disturbing because it disrupts the sexual fantasy.

The image on TIME cover upsets people by doing this so clearly. Jamie Lynn Grumet is attractive yet she’s breastfeeding an older child. She’s both sexy and maternal at the same time. This does not sit well with the male gaze. It makes women uncomfortable too because we are so programmed to pander to the male gaze.

Then there’s the age of the child. Who looks at their newborn latch on for the first time and thinks: “Right, that’s us sorted for the next two and a half maybe seven years?” Motherhood is a thing that slowly evolves. Our children lead us through every stage. They grow the mothers in us.

We learn to respond sensitively to their needs, if we will shut out a society that tells us that what children want is unimportant, that they must get with the programme from the moment they’re born, that, above all, they must not upset the rhythm of our lives.

Why does the image of a three-year-old breastfeeding bother people? Because we don’t see this day-to-day. We don’t see it because most of us don’t breastfeed or if we do, we stop early because we’re not given the right support. So we think a toddler breastfeeds for hours like a newborn. We think she remains as helpless as a younger baby because we have not had the chance to observe the growth of independence alongside an enduring breastfeeding relationship.

We don’t see it because women do not feel comfortable about breastfeeding older children in public when they’re old enough to understand the uninformed and sometimes harmful things that onlookers would say.

There is nothing damaging in sustained breastfeeding. All the health benefits continue past the age of one and can actually be identified, it continues to be a bonding experience for mother and child, and, no, you’re unlikely to meet a fourteen-year-old who’s still breastfeeding.

If you want to point the finger at something that’s damaging, take a good look at how we view women, motherhood and children. Something’s still not right there.

As for Talitha and I, we’ll stop when we’re ready, whether that’s sooner or later.