Breastfeeding in public: why do we need to see it? 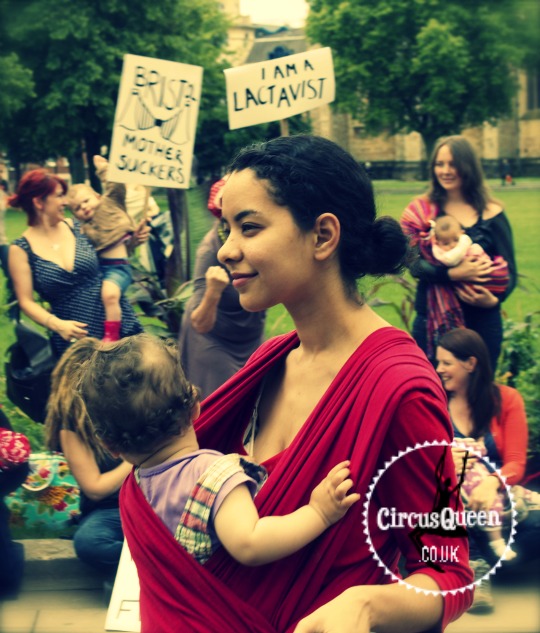 Sing and Sign over, I tied Talitha into her woven wrap, chosen because we were asked to wear something red, and rushed for the bus. I could not have possibly missed my stop. It was marked by a crowd of mothers (some reports say 200, others 300) and their babies and placards out on the pavement and filtering into the Park Street Café in Bristol.

Their placards read: “Lactavist”, “No one puts baby in a corner”, “Freedom to Feed” and “Bristol Mother Suckers”. We were all there because a woman named Kelly Schaecher told us that she’d been asked to move to a corner while breastfeeding in the café. She said that the incident started this way and ended with her being verbally abused as she walked up Park Street. The café manager has publicly apologised and put up a “Breastfeeding is welcome here” sticker on the café’s window.

So we were there, breastfeeding our children, having our photos taken and uniting in saying that a woman’s right to breastfeed her child publicly and her child’s right to be breastfed publicly need to be protected.

Yet it occurred to me when I was feeding Talitha to sleep last night that not everyone who passed by yesterday would have understood why this is so important or, even perhaps, why these are rights. Why do we need see women breastfeeding out in the open?

Well, there’s the obvious reason: because it’s normal. Babies need to be fed. Even when they’re out with their mothers. Why should they have to go somewhere designated or hidden to do this? Asking a mother to move to feed her baby is a form of ageism. This segregation is, to me, yet another indication that the culture we live in does not particularly value children and their needs.

We also don’t value women and their bodies. Would Kelly have been asked to move if she had been bottle feeding? No. In fact, she says she was breastfeeding behind a woman who was bottle feeding. This is not a question of bottle versus breast. It’s a question about why we are so afraid of women’s breasts.

We’re so comfortable with women’s bodies being displayed when sexually objectified, especially to sell things but when they function productively (eg to nourish and comfort a child) it disrupts the way we view them and that’s not something we’re comfortable with. Yet this is the primary function of the breast.

I could delve at this point into a conversation about femininity and power structures but I’m going to keep this simple because I think most of the people who’d see my point if I talked about those things are already converts. Instead I’ll just say that motherhood is really hard. It’s stressful enough getting out of the house with a baby without being ostracised for trying to meet that baby’s needs.

So why not express milk and bring it out in a bottle then? Breastmilk is healthiest when it comes from the breast and sometimes the baby needs not only the nourishment of breastmilk but the comfort of the breast itself. Also, why should we have to turn a natural process into a prosthetic one because adults can’t be adults about this?

I feel a little sad when I hear women say that they felt they had to express milk in order to leave the house. It makes me angry that we live in a society that is so much more comfortable with the artificial. Pumping is much more difficult and takes much longer for most women than breastfeeding. And then you’ve got the issues of sterilisation and storage, not to mention that if you’re doing this frequently instead of feeding your baby from the breast when you are with them, you could run the risk of messing with your milk production.

All of this benefits a powerful industry marketing artificial feeding and we as a culture have bought into it as a lifestyle. It’s led to one of the most detrimental effects of people not seeing women breastfeed: we’re losing accumulative knowledge. We’ve forgotten how breastfeeding is done, what it looks like.

No wonder so many new mothers are anxious and confused about breastfeeding. I was.

The first image was taken by Imogen Pettitt and is used with her permission.