Breastfeeding while pregnant – the second trimester 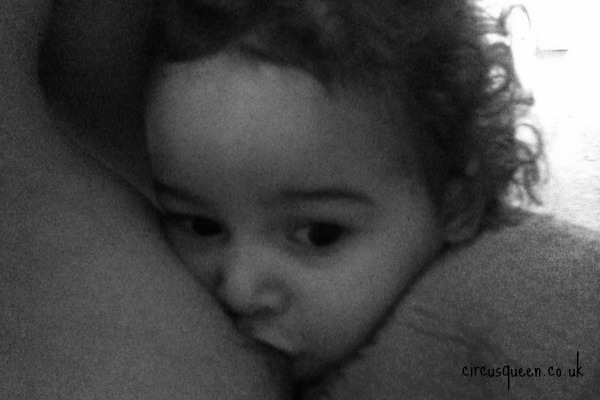 In those early weeks following Talitha’s birth, I found it difficult to blog about anything happening in our life, mainly because there was so much change. No sooner would I draft a post about her sleeping habits or my general weepiness than a sudden shift would occur and the topic no longer seemed relevant. I think that’s been the scary thing about blogging through breastfeeding in the present tense. I don’t know how this story goes and I don’t know how it ends – I’ve never known.

After the first trimester, where I was finding it plainly unpleasant, followed by weeks where she seemed to be losing interest and on the clear path to weaning, I doubted I would be writing this update. Yet here I am. I’ll be 26 weeks pregnant on Friday and she is two-and-a-half years old. We’re still breastfeeding. And it doesn’t look like we’re stopping though, you never know, next week it might. It’s so strange, living without certainty, but there’s something freeing in it nonetheless.

My feelings about breastfeeding while pregnant continue to be mixed. On one hand, I love that breastfeeding still brings her so much comfort and, indeed, joy. The other morning, she climbed into bed and asked: “Mummy, just a little bit of milky?” When I agreed, she literally yelled: “Yippee!” We all laughed. She had quite a nasty fall the other day but was quickly soothed by the breast. Now that my colostrum is in (at least a bit on one side), she tells me it tastes like apple.

Sometimes, it helps her to make the transition from being fully awake to fully asleep but she generally no longer falls asleep at the breast. Usually, she takes herself off and asks me to cuddle her or sing to her. Otherwise, I take her off because I still find it uncomfortable and can only stand it for short feeds.

And that’s part of the other hand. I’m still finding it physically uncomfortable to breastfeed her and nursing aversion comes at times to visit at times. I then get a powerful urge to throw her off me. But there is no need. Generally, if I tell her to let go, she will and even if she protests, she will accept it. In the rare instance that she won’t, I let her latch again with the warning that we’ll be counting to ten, at which point she has to let go and she will. Sometimes, she’ll just say she doesn’t want to count and we’ll instead get up for the day or she’ll roll over and go to sleep. Morning and bedtime are the only significant feeds she has. She’s mostly not interested at any other time and she’s given up naps (though I did argue her into one today).

Yet it’s such a change to just a while ago when I was convinced she was weaning because she only asked to breastfeed once every few days. She told me then that my milk would return when the baby was born and laughed when I asked if she would still be breastfeeding. Now I tell her that when the baby is born, the baby will need to have lots of milk. She asks cautiously: “I have milky too?” I ask her: “Will you want milky?” She always takes a moment to think about it, then says: “I will share with the baby.” I’ve explained about the baby needing more milk than she does but I don’t think I need to worry, and any case, it may not be a bridge we have to cross.

She still occasionally will randomly ask for a feed but only latch for moments. I get the impression that she just wants to make sure it’s still there; to be certain that she still has access. And she does. I don’t want to rush her independence and at the moment I don’t feel like I need to, which I’m glad of. The pain has been quite bad at times but it hasn’t paralleled the agony my nipples were in during my first pregnancy (when I wasn’t even breastfeeding!). The discomfort has been horrid but it’s been an opportunity for her to learn boundaries, which is healthy, and those boundaries have made me feel able to allow her to continue.

Yet, every now and then, I wonder, for how long? Rationally, I know that all children wean, weaning does happen and there is wisdom in allowing nature to unfold. The impatient side of me wants to know for sure what’s going to happen. In a few months time, will I be breastfeeding two children? What will that be like? Will she wean soon after? Will she wean before? I cannot know. All I know is all I’ve ever known – that this is what we’re doing now. Oh, and I now know that colostrum tastes like apple, apparently.