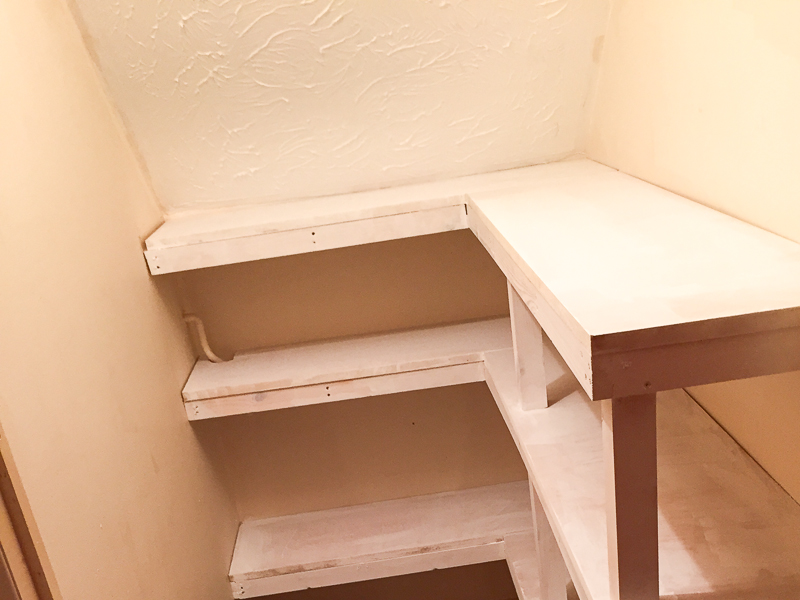 This is an old project but one I’ve been wanting to share for a while.

One of the things I got excited about when we were buying our house was that there was a downstairs loo. I’ve lost track of how many people have assumed that that was because of toilet training.

Actually, I often feel a bit lazy about going all the way upstairs to the loo, if I’m honest! And when we have people staying with us for an extended period of time, a second toilet would be handy. Time to think about building that compost loo in the garden maybe?!

Anyhoo, said downstairs loo made a funny noise whenever we flushed it. Scary for any toddlers present (and maybe for me…). It progressively got worse.

Finally, we had a friend who’s a plumber around and found out that it actually wasn’t plumbed normally into the system but was a macerator toilet. Take a look at this Mumsnet thread if you want to know why that was a big deal (and read some stuff than cannot be unread).

Bye bye, loo. Our friend removed it for us and it henceforth became the place where we threw all the stuff. As in, you’d open it and risk an avalanche as well as lose sanity and years trying to find the simplest of things “stored” in there. After much frustration, a brilliant idea was born: we should turn the space into a pantry.

I was all for getting someone else to do it, eventually, but Laurence fancied the challenge. So he got pinning and purchasing. The girls and I went to his parents’ house for a day to leave him to it without distraction. And we came back to be so impressed by it all. A little paint on the floor but other than that, it’s pretty pro.

I guess that gives us something in common with 70 per cent of UK homeowners who responded to the Wren Kitchens Home Wrenovation Survey saying that they or their partners would get involved in DIY. Although, perhaps I’m aging ahead of Laurence because, apparently, the older you get the more likely you are to hire someone to do the job! It’s a genuinely interesting read, by the way, especially if you own a house or are considering buying.

We’ve a way to go in terms of actually organising the shelves of this pantry, but we’re already enjoying being able to find things again. It’s making baking and cooking that bit less stressful and more pleasurable. It’s especially satisfying for storing any bulk purchases now that we’ve set up an organic food buying group.

In collaboration with Wren Kitchens