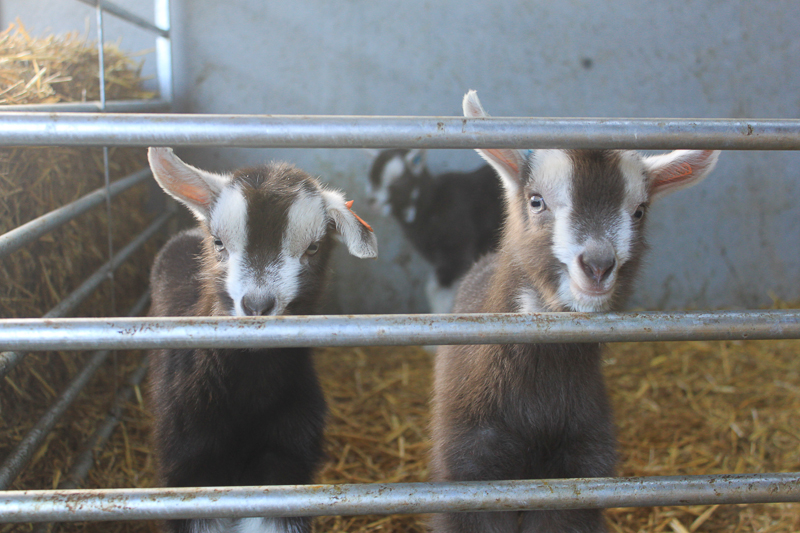 A year ago, Laurence and Talitha did an early Spring camping trip to Wookey Farm in Somerset – their first camping trip. Unsurprisingly, I wasn’t keen to take along two-month-old Ophelia so we stayed behind, an hour away in Bristol. We did join them a couple of months later, camping near Penzance, mind.

Anyway, I was so envious looking at photographs of the amazing time they had, that we decided we’d go the next Spring. So, this weekend we did just that. Talitha suggested we invite friends to come along. Camping with another family was such fun.

Wookey Farm is a small family-run dairy goat farm with an eco campsite.

I’ll admit I wasn’t thrilled to learn that we’d be using compost loos for the weekend. I wasn’t a fan of them last time we went camping – it involved walking through the woods in the dark and a spider in the loo (I know! I know! I’m a grown woman…).

That could be why Laurence only told me when we practically on our way! These were decent, though. OK for a weekend. I’ll be eating all these words someday if we ever end up living somewhere with a compost loo, which is not totally unimaginable.

Of course, the children loved seeing the animals. And, being Spring, there were lots of babies to be seen. We got to see kids and lambs fed a couple of times as well as a milking.

Talitha even got to feed Tiny Tim, the runt of his litter. She and her friend spent the rest of the day pretending to be Tiny Tim and feeding each other. Well, they tried to get Ophelia to be Tiny Tim at first but I think she lost interest in her water bottle too quickly for their liking.

It was so different camping with Ophelia this time around. I don’t think she was mobile when we camped at Cirencester in the Autumn. She absolutely would not be held the whole time, insisting on getting down to explore. She’s not quite walking yet, so it meant she just scrabbled around getting gloriously muddy!

She is into everything at the moment, so there was quite few unpackings and we had to keep a close watch on knives and the campfire. One thing hasn’t changed. Talitha sleeps like a log in a tent. Ophelia wakes up again and again and again. At one point, Talitha muttered in her sleep: “Ophelia!” She may have been getting tired of her little sister’s midnight squeals.

There’s a bit of space to walk around Wookey Farm, complete with a stream and a swing. Laurence organised a treasure hunt for the children. The loos had information on the local pub, sights and walks but, actually, there seemed enough to do just hanging around the campsite.

The farm has an “honesty shop” which sells its own produce so we enjoyed eating pork and goat meat, goat’s brie and soft cheese while there. I bought a few bits to bring home too. It was actually pretty lucky that there was a shop onsite because we needed to throw together an emergency picnic for lunch, since we’d planned to leave after breakfast on Sunday.

I did a really silly thing and charged my phone in the car a few times without turning it on. Long story short, I ran down the battery and that triggered some problem with the immobiliser. Even though we got the battery charged, the car wouldn’t start and we wound up getting towed back to Bristol. So, um, yeah, next time I’ll just embrace nature.

Luckily, we were in the perfect place to be stranded for a couple of hours. We got a brew on, made goat’s cheese sandwiches and watched our daughters play together in the open field. I think Talitha thought getting towed by the recovery truck made for a cracking adventure.

So, that’s the first camping trip of the year done. I naively underestimated the changeability of British weather. It was practically summer all of last week but it got so cold over the weekend that we were back in winter coats and the water in Ophelia’s sippy cup froze overnight! Never mind, it didn’t spoil our time but we might just wait until it’s warmed up a bit more before camping again.