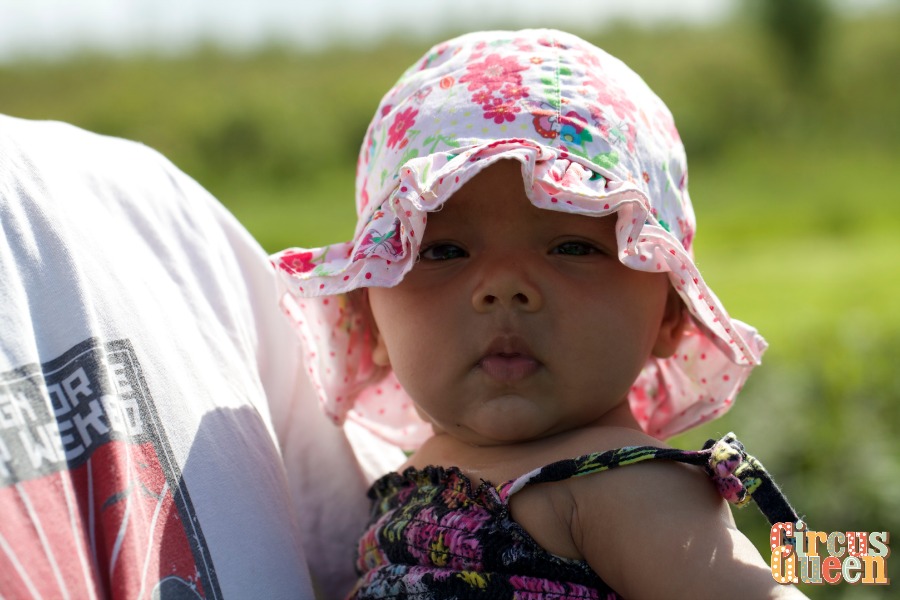 A few weeks ago the four of us went camping in Penzance for a weekend. Ophelia had just turned four-months-old and I’d wondered for weeks what camping with a baby might be like. As it turned out, the camping was a breeze, the four-hour drive to Penzance with a baby who hates the car on the other hand…

While chatting with a friend who recently took a similarly-aged baby camping, her first child, I mused that I never could have done it with Talitha. That’s partly because she was a frequent waker, generally stressed out baby and I was still supplementing, and partly because I was so tightly wound.

The fact that I agreed to give camping a go while Ophelia is so young proves to me just how much more relaxed I am this time and how much better it’s all going. I am not a natural camper so I did take some convincing.

I benefited from tips that others gave me before we went so I thought I’d share a few here:

Throw out the routine
Not that Ophelia has an iron-clad routine anyway but we do tend to lull her to sleep sort of 7ish and she does tend to wake up around 8.30. We accepted, though, that neither of the girls were very interested in sleep at the usual time. I guess it was light, a different setting and they could hear us chatting so it was clear that we weren’t going to sleep. They both made up for lost sleep with naps on the move the next day.

Dress them in layers
I dressed Ophelia in the same number of layers I was wearing to bed. She wore vest, babygrow, fleecesuit, baby sleeping bag, hat and then went into the sleeping bag with me. The advantage of being close was that as soon as morning struck, I instinctively peeled layers off her while half asleep. It was really handy that everything zipped down the front. She didn’t rouse much and I could easily feed her back to sleep for a bit longer.

Bring a spare
Friends warned me that things can unexpectedly get wet when you’re camping. I brought spares of most things but forgot to bring a spare hat. Consequently, that’s what got wet. As it turned out, our second night was warmer than the first so we didn’t need it but lesson learned for next time.

Sling that baby
We wear Ophelia all the time anyway, but I was especially glad that we do when I saw the campsite Laurence had chosen. There’s no way a buggy would have coped with it and it was useful to sling Ophelia for a bit in the evening until we were ready to settle her in for the night.

Upsides: Talitha was desperate for all of us to go camping together so it was lovely to give her that experience this summer. At four months, Ophelia is exclusively breastfed so no need to think about what to feed her and she’s not mobile so no stressing about her getting into mischief. She also loved just lying and looking up at the tent.

Downsides: Our sleep was shocking. I think Laurence and Talitha were out like lights but Ophelia woke so much – just momentarily to find a boob then drift back to sleep. So, actually, I think she slept fine but I was exhausted the next morning! I also tend to naturally arrange my body protectively around hers, which meant that I was stuck in one position all night. That’s manageable in bed but it’s not a great idea if you’re effectively sleeping on the ground. Ah well…

Have you been camping with a baby? Would you? Do you have any tips and ideas to share?