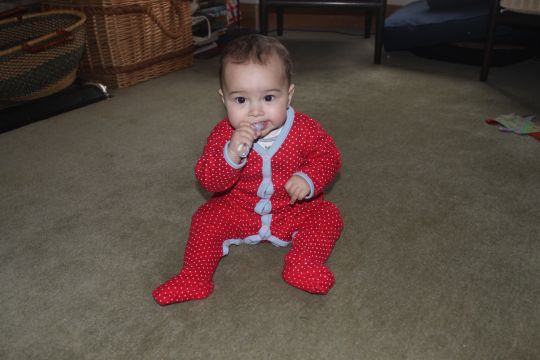 I’m not the mum who gets the wipes out for every toy at Rhyme Time before her precious child touches one but I do reserve the right to reject anything with food or snot dried on to it. There. That sounds pretty balanced.

This is probably why I haven’t quite made up my mind about dental hygiene pre-teeth. Brush-Baby sent me some DentalWipes and a chewable toothbrush a good while ago but because I was so insistent that my daughter was going to get teeth “any day now” I waited to use them.

Well, despite teething on and off for the last five months (hold me in your prayers) those stubborn things seem to have no intention of making an appearance.

Before you say it, this has in no way prevented her from biting my boobs – but we’ve moved on from that, for now anyway.

So I decided it was time to accept the claim that cleaning gums is important for growing healthy teeth and was helped along by seeing two infants with teeth that came in black with tooth decay.

Now, I know that that scenario is relatively rare and, as my in-laws pointed out, the generation before us didn’t bother with cleaning gums and most of their babies didn’t end up with the teeth we usually associate with bottle-mouth.

BUT, I was and am a teensy weensy bit scared, I’ll be honest. Especially since Talitha has a significant lip-tie which has been associated with milk pooling in the front of the mouth.

It’s probably a good time then for me to try these products. I’ve started by using the disposable DentalWipes after her main meals, usually breakfast and dinner. I put it on my finger and wipe over her gums, inner cheeks and tongue. I expected her to fuss about it at least but she doesn’t seem to mind at all.

Whether it’s doing anything, I can’t say but it does give me peace of mind. I’m not sure, to be honest, that I’m likely to continue with them once the sample runs out. I’m not a fan of disposable things and though I’ve read good stuff about xylitol reducing decay-causing bacteria, well, breastmilk contains proteins that are said to combat that bacteria too. Obviously the same can’t be said for the other food she’s eating.

I am, however, a lot more convinced by the chewable toothbrush. Technically it’s for babies 10 months to three years (another reason why I held back on writing this review) but Talitha is nearing nine months so I thought I’d give it to her and see how she got on.

We’re not using it with toothpaste because she’s too young and doesn’t have any teeth, obviously. But I’m amazed at how she grips it and so easily puts it in her mouth and gets going. I think it’s been particularly helpful since her gums seem to be itchy off and on.

It’s so easy to just hand it to her after meals and let her get on with it then give it a rinse when she’s done. She seems to love it so it’s obviously well-designed. I’m a lot more likely to continue with this one.

So, the truth about baby gums and dental hygiene? I’m not quite here nor there yet but if it makes you happy, it can’t be that bad, right?

Anyone else used these products? What do you think? Any thoughts on gum cleaning in general?
———————————–

Brush-Baby sent me DentalWipes and a chewable toothbrush for this post. Obviously, I’m not anything if not honest.