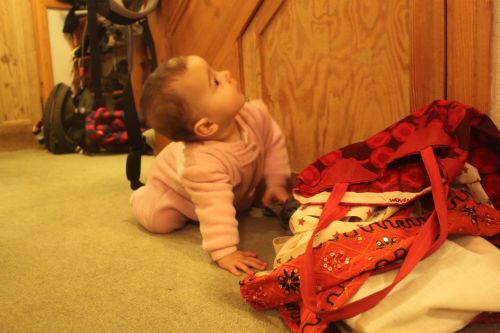 Talitha has started crawling. It’s exciting but she can only go backwards. Mostly she doesn’t mind, until she does.

Usually she’s crawling merrily backwards going “Dadadadadada” until she’s obstructed by a wall and launches straight into wailing “maMAAAAmaMAAA”. Someone tell me, why is “dada” for happy times and “mama” when she needs something?

I try turning her to see if that resets the system but once she’s started bawling, that’s it, she wants to be held. It’s all very cute, if a little inconvenient.

She can move forward but I wouldn’t call it crawling. It’s more what a friend termed “sprawling”. It’s a movement that happens without me quite discerning how she’s managed to make it happen. I often wonder if she even notices that she’s doing it.

This she seems to do without effort but as soon as she focuses on something she wants to get to, usually something gross like a hairball, which I shouldn’t admit to having on my floor, the backwards crawl begins.

That’s what I presume happened last week when her cries interrupted me in the middle of the dishes. It took me a few moments to realise that she was underneath one of the kitchen cupboards, only her head poking out. The more she cried, the further under she went.

Parenting check: how bad is it that I was torn for a split second over whether to fetch her out first or take a picture? (Relax. I did the right thing. I think.)

I’ve tried standing behind her to see if she would crawl backwards toward me and get some gratification for her hard work. She just sits up, turns to face me and then starts crawling backwards away from me.

Oh little Talitha, you obviously find this frustrating at times. It’s only going to last a short while.

There will be so many points over the course of your life where you see what you want but, at first, can’t get to it.

Your frustration will break my heart.

Your frustration will drive you.