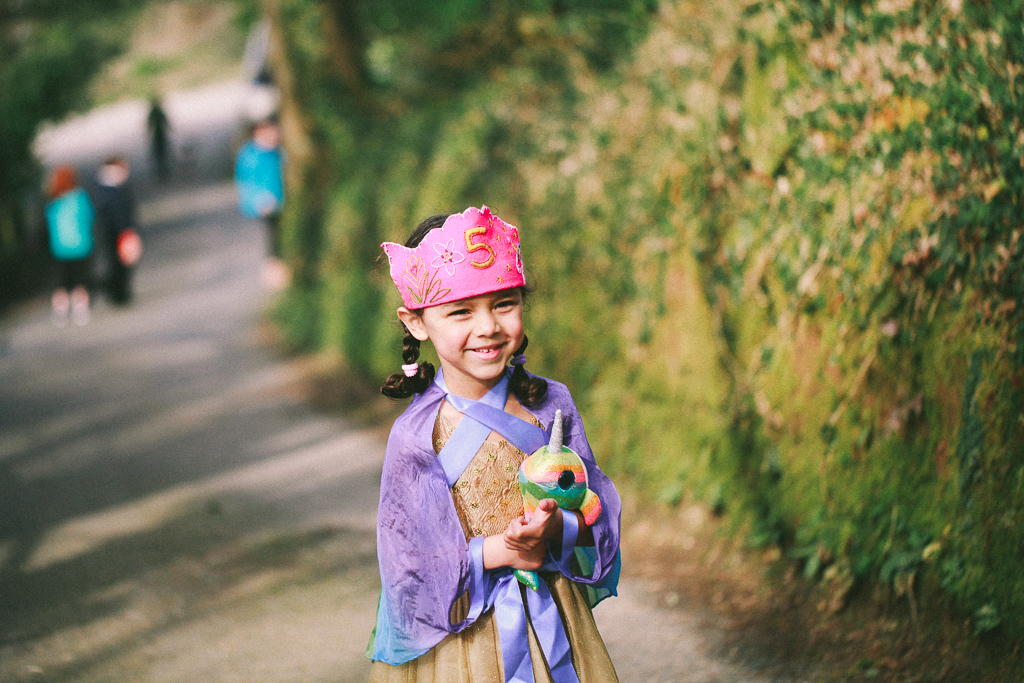 Last month we celebrated Ophelia’s fifth birthday. I am in no way used to her being 5 yet. She just yesterday started saying the “L” sound instead of replacing it with the “Y” sound. I’m going to miss all those “yions” and “yetters”, and I may not be able to quite cope with her being able to accurately pronounce all the names in our family. How have I noticed we have a theme of L’s in our names now that she can say them?

In the lead up to her birthday, I began making her birthday crown, sharing the progress in my stories on Instagram. It’s just a rectangle of felt folded in half, cut crown shaped on the outer edges, embroidered and sewn over a bit of elastic the size of her head. The elastic I upcycled from a pair of child’s leggings that were beyond repair. Previously, I appliquéd the decorations rather than embroider.

Without meaning to, we’ve fallen into a pattern with these crowns. Birthday theme on one side, birthday flower on the other. So she chose unicorns and as the crocuses are always in bloom for her birthday, she’s claimed them as hers. We love that her birthday is another marker that the world is waking up again – Spring is on its way.

I was surprised and grateful that so many people responded so warmly to the birthday crown and it made me think that it could be worth sharing a few more of our traditions in case you were looking for some inspiration. Repeatedly weaving beautiful touches into special days like birthdays can help deepen our memories as families. I don’t think it particularly matters what those touches are as long as they are meaningful to you.

It’s also not necessary to start early or not at all. I’ve never got around to making a birthday crown for Talitha but she has cornered me for one this year and I am certainly going to make it as she’ll be eight and who knows if she’ll ever want another? Perhaps at nine she’ll decide she’s too old for a birthday crown.

A few more traditions we’ve accrued over the years:

Wrapping presents thoughtfully
We have a collection of play silks the kids have been given over the years and they are used for all sorts of imaginative play but the night before the birthday they become gift wraps. Scarfs can be used in lieu of play silks, picked up at a charity shop if you don’t already have any. They make fantastic play things in their own right between birthdays if you’re newly acquiring them.

We also have a fabric gift wrap that my mother-in-law made with cloth printed with Roald Dahl’s The Enormous Crocodile one year. It comes out for one of Ophelia’s presents every birthday and Christmas and she looks forward to seeing it. I will try to update this post with a picture of it as I’ve realised while writing that we forgot to photograph it on her birthday.

I was in a quandary about how to wrap the surfboard we bought her this year. In the end I wrapped it in some mermaid fabric from The Cornish Haberdashery. I will sew into something for the girls soon.

Laying the birthday table
After the kids go to sleep, we lay a table cloth or runner, get lots of candles out and generally make the table as fancy as possible. We’re limiting our use of balloons but blew up a single balloon a friend had given her, which made it quite a treat. That, too, waited on the table alongside all the gifts, ready for the morning.

In future, I’d love to also include a framed baby picture of the birthday child. Some people include a train of photos from every year of the child’s life, which I love the idea of but I know would be too intense for me, especially if a party is also involved. I printed a unicorn-themed “Happy Birthday” banner to stick up in the dining room last minute but I’d like to perhaps make some birthday bunting that we could reuse every birthday. We have red and gold bunting a friend made for our wedding that comes out every Christmas but Laurence, justifiably, balked at the idea of getting the decorations box down again so we could put it up. And actually, I think the kids would have argued that it’s not Christmas, had we managed it.

Something to plant
Without meaning to, we’ve fallen into a tradition of giving something to plant most birthdays, whether it’s a potted plant or a pack of seeds. I’d like to more intentionally make sure we do this every birthday because they get so much enjoyment from planting it the next day and then having something of their own to tend to and take note of in the garden afterwards (that sounded very Secret Garden!). This year I picked up a pink primrose for a pound in a farm shop.

Mindful presents
We make a point of ensuring that at least most of the presents we give are genuinely useful and we try to buy things second hand (like the surfboard) or from small, ethical companies. This year, Ophelia’s presents included an Opinel knife, a shovel and a knitting fork. Useful presents are gifts that keep giving as children have the satisfaction of accomplishing real tasks and contributing to family life in meaningful ways. The knife, in particular, was a much longed for request and Talitha got it for her in pink, her current favourite colour.

Funnily enough, after Ophelia’s birthday I won a copy of Whole Family Rhythms’ mini ebook Whole Family Birthdays in a giveaway Meagan ran on her Instagram. It’s great little read if you want some more inspiration after reading this post.

PS: The cake looked a dream, tasted nice enough but was a really weird texture because I somehow managed to misread the ingredients and put like ten times the amount of almond milk required! Just, you know, keeping it real.