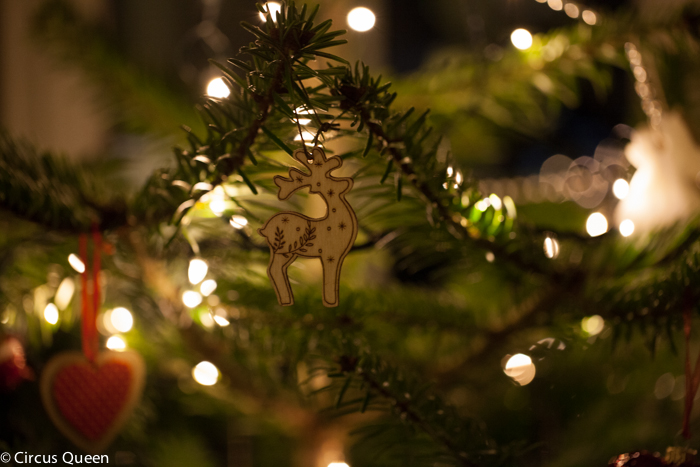 In a perfect world, the Christmas tree would have arrived. Ophelia would have slept or otherwise happily entertained herself. I would have tangibly demonstrated “you don’t need a man to do it” by putting the tree up myself. We would have spent an easy afternoon decorating the tree.

I would have taken the photos and this would have been a post about the bliss of establishing a Christmas tradition for our little family. And I would have surprised the heck out of Laurence when he got home.

Instead, our tree was delivered by Pines and Needles on Tuesday. Ophelia was having a fussy day so I stuck The Snowman on for Talitha while I tried to get her baby sister to sleep. She was a bit disappointed because she thought it was going to be Frozen, which she’s heard everyone talk about so much but which she’s not yet seen. She did enjoy it in the end, though.

Our lovely six-foot Nordmann Fir Christmas Tree lay in a red bag, across our livingroom, just waiting for discovery. In the end, I gave up on Ophelia sleeping and stuck her on my back so we could cut the bag open. We ooed over it and took in the smell of pine needles. I got out the water-holding stand that Pines and Needles had also sent.

Then I remembered that we needed to saw off a bit of the base so the tree could drink in the water effectively. At that hurdle, I gave up. It was too much for me with a fussy baby. I’ll be honest.

I told Talitha that we needed Daddy to come, not because it was a “daddy’s job” but because two grown ups needed to do it together. This explanation held no water when Laurence came home and put it up on his own with no trouble at all. Oops.

It’s probably worth noting that Pines and Needles do offer the option of getting the tree set up when it’s delivered, just so you know in case that’s something useful for you.

I couldn’t believe how full the tree was when we opened it. I know some people like to go see the trees before they buy so they can pick a shape but I am so pleased with this tree.

The tree was ordered from Pines and Needles for me and I got an email receipt as I would’ve had I ordered it myself. The friendly delivery woman helped me bring the tree, the base and two mini trees (for the girls – we’ve put them on the dining table).

I never feel like you can really tell whether you got a tree in its prime until you see how well it’s lasted the season but so far, so good. We’ve been watering it lots and it seems in good shape. I’ll be back to update this post later on to let you know how well it’s done.

Laurence put the lights on because I hate doing them and because once he’s done that he feels he’s done his part in the tree decorating process and leaves us to it. Three quarters of them didn’t work. I know they were cheap lights but still. It was disappointing.

We agreed I’d buy lights the next day and let Talitha hang a few decorations because she was so excited about the whole thing and we’d let her stay up extra late until Laurence got home so she could do it. That was Tuesday.

The next day I bought a load of little strings of lights because they were all I could find. Common sense failure. Where were we going to plug all these things in? How messy were all these wires? That was Wednesday.

On Thursday Talitha kept asking if we could decorate the tree so I half-heartedly joined her in adding a few more. Laurence came home that night with a beautiful set of lights he’d bought in his lunch break!

While I was upstairs settling Ophelia to sleep, he was downstairs, late into the night, taking off all the lights and stringing on the new set. Bless that lovely, lovely man. That was Thursday.

Then yesterday, Friday, we finally decorated our Christmas tree. I put on some carols to set the mood. I put Ophelia on my back. I pretended I wasn’t feeling under the weather, though I was. I tried to make it the experience for Talitha I hoped it would be.

Instead, we ended up disagreeing over where to put things. She kept insisting on tinsel which I kept veto-ing. She lost interest. She came back. I let her direct me a bit more. We negotiated some things. I tried to ignore my pounding headache.

I vacuumed the room (a few needles have been falling but not too many, I’d say) and we looked at the tree together. She said she wanted to add more things. I agreed we’d make pom poms for the tree.

I said we’d think about a star for the top. The angel is a gift from my mother but I think all the books with pictures of stars make Talitha think a Christmas tree should have a star.

It was hard to tell how she felt about the whole thing. But we all spent the evening out and when we got in, she wanted to show Laurence the tree, first thing. She is so delighted with our tree.

Yes, it took four days to decorate our Christmas tree. Yes, life moves more slowly with a baby in tow. Yes, adults and children don’t always have the same ideas about things.

Thankfully, the experience didn’t had to be perfect. It only had to be “ours”.

PS: Pines and Needles sent me this tree for the purpose of an honest review. In case you decide you’d like to purchase one of their trees, they’ve given me the code “CIRC14” which will entitle you to a free a gift and give me a small referral fee.