Diwali with my kids 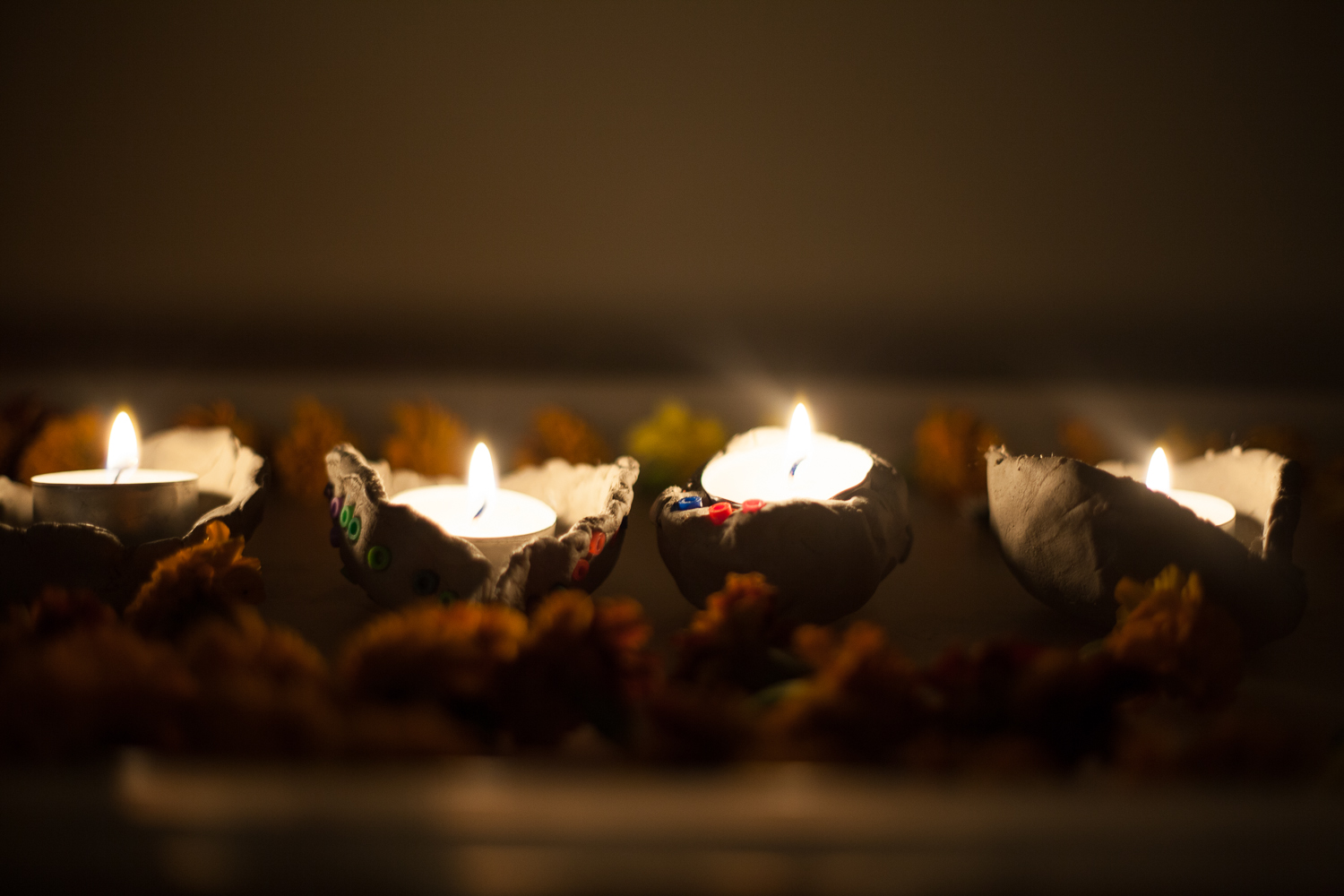 We’ve had a day at home (Ophelia has chicken pox, though I keep forgetting she does – it’s so mild) and so got up to all sorts but I wanted to focus a few of our activities around Divali, the Hindu festival of lights.

I grew up in Trinidad and Tobago where this is a national holiday and I cherish my own memories of it (going to friends and family for a curry feast, taking home bags of Indian sweets, driving around to look at the lamps set on shaped bamboo). I feel a little sad that they won’t grow up with those experiences. Perhaps we will spend a Divali in Trinidad some day.

We’d borrowed a couple of books from the library about Divali, so we read those again. We also looked at a couple of CBeebies videos: one about a family celebrating Divali in Britain and the other the story of Ram and Sita, told with Indonesian shadow puppets, especially thrilling to my four-year-old.

This led on to a couple of short videos of people making rangoli patterns on the floor with coloured rice powder, which both girls were completely taken with. Talitha loved predicting what she thought they were going to do next in the pattern and was thrilled in equal measure when proven right or surprised. We also looked at photographs of diya displays in Trinidad.

We made some pholourie for a savoury snack while listening to traditional Indian music. While cooking, we talked about Divali, India and Trinidad and Tobago, taking a moment to go look at the map and talk about the boat ride our ancestors took from India to Trinidad.

We made diya lamps from air drying clay and the girls picked flowers from the garden to decorate and order them on a tray. Ideally we would have done this beforehand as we’re probably going to end up painting them tomorrow but never mind.

We also planned to make coconut barfi but ran out of time so that’s gone into tomorrow’s plans too. In a way, it also fits with Charlie and the Chocolate Factory – which we’re currently reading – as they’re sweets.

Ophelia needed a nap so I gave Talitha a bowl each of green and red lentils and millet flakes and she grabbed some chalk to make a rangoli pattern on the floor while I settled her sister upstairs.

The twenty-one-month-old is really fighting naps at the moment so it wasn’t long before she was downstairs again, supercharged from the shortest time asleep! Never mind, they both got stuck in with water colours on rangoli patterns I printed from Twinkl, which I’ve just renewed my subscription for.

Of course, we also had to have a curry dinner but we’re low on supplies so only had dhaal and rice, perfect for my kids as they love it but not that special as it’s my standard go-to last minute meal!

Despite having curated this Divali Pinterest board, I still ended up slightly pulling it all out of a hat. Maybe I’ll be more organised next year. I imagine that, at five-and-a-half, Talitha will have so many more questions about it all.