Donor milk – would you use it? 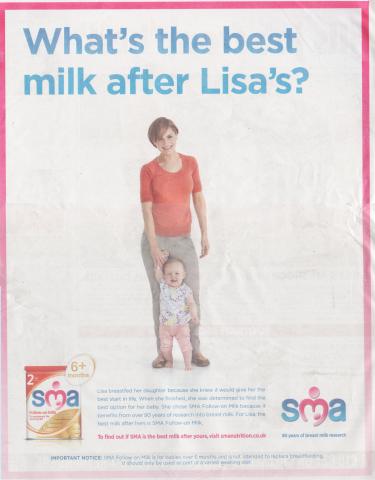 Someone posted the sister advertisement to this one in one of the breastfeeding Facebook groups I’m a member of. The advert she posted asked: “What’s the best milk after Emma’s?” It featured an even younger baby than the one here. The baby in that photo was sitting up with her mother positioned to support her, should she wobble.

The World Health Organisation would answer the question in both adverts with: “donor milk”. So I’m tempted to Photoshop this ad to replace the SMA info at the bottom with: “Milk from another mother”.

This ad campaign annoys me on so many levels, from the obvious inaccuracy I’ve already mentioned to the numerous ways it flouts the International Code of Marketing of Breastmilk Substitutes. However, I’m not going to get into those right now.

(You can read more about it on the Baby Feeding Law Group if you like.)

What it made me think about again was whether I would use donor milk. The hierarchy of milks goes like this: mother’s milk, her expressed milk, another mother’s milk and, failing all of that, formula.

I knew that when I gave Talitha formula.

She was combination fed for two and a half months then given formula supplements on and off for another one and a half until I realised that she really didn’t need them anymore.

The first time I looked at the back of a tin of formula, I was both intrigued and upset by its ingredients. It’s obvious to anyone who looks at the list that it’s highly processed stuff. That goes for “organic” formula too.

I was surprised by how many women offered me their pumped milk. Their kindness was touching. These were offers of compassion. They came straight from a mother’s heart. I couldn’t accept it though.

It wasn’t that donor milk weirded me out. In fact, feeding my baby another woman’s milk seemed a lot more natural to me than mixing powdered milk from another species, chemistry set-ed together in a laboratory.

The problem was that pasteurisation on its own couldn’t set me at ease. Short of screening, I couldn’t be absolutely certain of the state of another person’s health.

Under the stress of the situation we were in, I needed to take the option most easily available to us. So I reached for a tin. But it was NOT the best milk after my own.

I often wished that it were possible for me to access donor milk from a bank but those resources are so stretched they can only cater for special cases, usually premature newborns, and rightly so. Babies in those conditions desperately need it. Breast milk is their lifeline. Meeting their needs is certainly where we need to start.

That left me with the friends who’d offered and unofficial milksharing organisations such as Human Milk 4 Human Babies, a route I obviously would not go down.

That said, if I didn’t have low supply issues and wasn’t taking domperidone, and you needed my milk, I’d give it to you. Would you use it?

—————————————
By the way, particularly if you live in the South-West, think about supporting Southmead Hospital’s Milk Bank, Precious Drops. It’s been in the news recently for helping 20 premature and sick babies across the region.