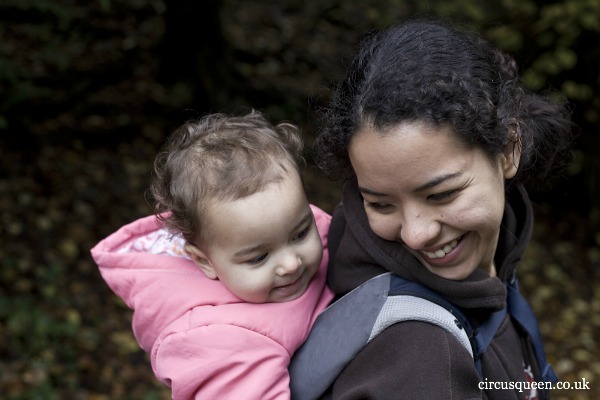 We bought the ERGObaby Performance edition last Christmas just before flying out to Trinidad. I begged to have it as my Christmas present. Laurence called me boring but it’s been one of the most useful bits of baby kit we’ve owned. It’s practically an extension of us.

I’ve been getting more into wrapping recently but having a quality structured carrier has been worth far more than what we spent on it. At any rate, Laurence is unwilling to wrap, preferring the ease and buckles of the ERGO. That’s fine. I appreciate his honesty and the fact that he’ll wear her is enough. (I did a very basic comparison of the ERGO versus the Stochenwiege woven wrap months ago, if you’re trying to decide which is for you.)

Anyway, I’ve got masses of use out of the ERGO because I don’t like either of the pushchairs we own. I’ve also just got on really well with babywearing in general. Talitha and I both really like the closeness it affords us. It allows her to get a better view of the world with the continued security of facing me. When I put her on my back, she gets to see where we’re going too. The ERGO has given us such an easy and comfortable way of finding this freedom together.

That said, I’ve found dealing with rainy weather a bit stressful. When Talitha was a young baby, I would simply wear one of Laurence’s rain jackets and tuck her in it. An umbrella did the rest. It was plain unflattering and uncomfortable and I won’t do it anymore. She also won’t fit inside the jacket – she’s kind of grown.

This year, we haven’t got that problem. ERGObaby sent me a rain cover to see if that would solve it. I’m actually quite impressed. We’ve gone out with the navy blue water resistant ERGObaby rain cover a fair few times now and it really does the trick. No more worrying about little feet catching the drizzle.

When I took it out of the box I was determined that this would be once bit of baby gear that I’d work out for myself. I’m not the technical-minded one in the family. How hard could this be anyway? Umm, hard. For someone like me. The poppers confused me and the instructions confused me even further. I looked on YouTube for a video demonstration but no joy. All I found was a video explaining what it was and another one demonstrating a different type of weather cover. Huh.

So, I did the usual and asked the competent adult to figure it out and show me. It probably took him a minute at most to work it out. Then he showed me and it was, umm, VERY easy so I felt a bit silly. To make for that, I’ve made this video on how to use the ERGObaby rain cover to look like I’m an authority on the subject (and to help anyone else who gets similarly confused – I can’t be the only one!).

Would I buy it?

Yes, I would! It’s made such a difference to our days out. I know rain cover is not a huge issue if you drive or also use a pushchair but for me it’s been invaluable. That said, I’m starting to think about solutions for my wraps and maybe a more generic cover for might be the way to go? Don’t know. I haven’t quite worked that one out yet. If you mainly or only use the ERGO though, I highly rate this rain cover.

——————————
To keep up with my videos, subscribe to circusqueendotcom on Youtube.
ALWAYS make sure you buy an ERGObaby carrier from a genuine seller. There are a lot of fakes out there and they’re dangerous.
I was sent an ERGObaby navy blue rain cover for the purposes of this review. As always, I’m nothing if not honest.