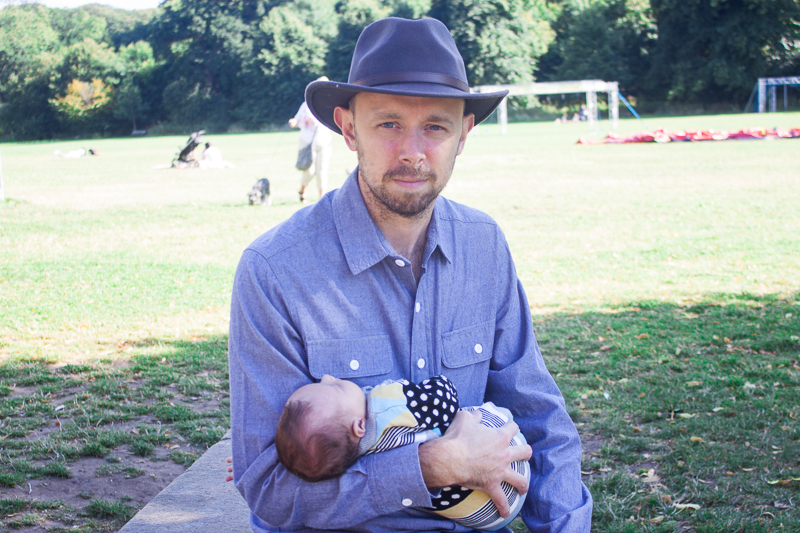 It’s crazy to think Delilah has been here four weeks already. A month. A month with three children. A month as a family of five. It’s strange to think that a tiny person who mainly sleeps, feeds and excretes has taken up so much space in our lives.

Talitha and Ophelia are besotted with her. I wondered if their interest in her would wane but it hasn’t and, thinking about it, it never did between them either. They continue to be in love with each other, always wanting to know where the other is and what the other is doing. Now with Delilah here, they both come looking for her first thing in the morning, arguing over who gets to lie next to her “to see her eyes”. Ophelia keeps asking “Where Lilah?” and “Is she awake?” followed by “I want hold her”. Talitha’s refrains are “Delilah’s so tiny!” and “She’s such a beautiful baby!”

Third time around, the baby thing is so familiar, it’s thoroughly enjoyable. Changing her, burping her, dressing her, slinging her, holding her one handed while doing all sorts – it’s all practically muscle memory. We’re confident we won’t break her.

There’s also no worrying about whether we’re doing the “right” thing. I mused to Laurence about this last night as he sat in the arm chair holding a sleeping baby while watching The Olympics. With Talitha we might have spent the evening making many attempts to put her in the Moses basket. Putting Delilah down hadn’t even occurred to him as an option. He was quite enjoying a cuddle.

The new challenge is learning how to parent the older children with a newborn. This struggle is mostly mine. I’m the only one who’ll ever have all three on my own at least for the next few months.

I’m also the one who has grown and birthed a baby and now has all her instincts pulled into this tiny, needy human being. It’s easy to feel that the older ones are just too hectic, that they’re crowding us and to feel a bit out of control. I have to consciously keep reminding myself that my older ones are very little still; they still need much from me. At two and a half, Ophelia won’t let me forget that, often asking to be picked up or to be cuddled in bed at times when I can’t. Talitha is a lot more independent at five years old, and willing to go with the flow as is her personality, but I’m aware that she needs more than she’ll demand.

We’ve tried to make time for me to be with each of the girls individually, either with Delilah or on my own if Laurence is around to hold her. That’s done masses both to help me recalibrate and to give the girls the reconnection they need. I’ve found in these times that Talitha gets more affectionate than she normally would, cuddling, kissing and saying the sweetest things. Ophelia melts into me. Both drink up the attention.

I’d thought that I might be tandem breastfeeding again and I had massively mixed feelings about the possibility. Las time, breastfeeding a toddler and new baby simultaneously built up my milk supply quickly while helping me avoid any engorgement. It kept the connection between me and my first born strong and I credited it with helping us avoid jealousy or feelings or rejection.

Still, it was hard work. I struggled to help her wait her turn when I found it too difficult to nurse them together. My breastfeeding aversion never completely went away though I felt fine breastfeeding the baby. When she finally weaned about a year and a half later, I felt sad but ready.

This time, I was willing to wait and see what would happen. Ophelia readily accepted that the baby would have my milk. She needed no explanation. She also did not ask to nurse. She told me that “muh” was for the baby. For a long time she didn’t breastfeed and I wondered if that was the end of it. I knew it would be easier in some ways to just breastfeed Delilah but I didn’t want to withhold something my toddler might still need. Two-and-a-half is on young in the natural weaning age range. “Don’t offer, don’t refuse” is weaning strategy so I knew that by not offering, I was weaning her. I felt conflicted both ways.

In the end, she did ask again. In the past month, she has nursed a handful of times. I don’t feel I can call it breastfeeding as she just puts her mouth to the breast but doesn’t really latch. In a few moments, she is done. She is weaning. I have to trust that she is ready. I have to trust that I will meet her need for attachment in other ways now that she is moving on.

Breastfeeding Delilah has been its own experience. I haven’t worried like I did with the others. With Talitha, everything was new and so much was a battle. With Ophelia, I worried that I’d once again end up not making enough milk and having to fight to breastfeed her. With Delilah, I’ve known that it would be OK. Still, I had to work to help her latch correctly and she’s only just started waking up on her own for feeds. I also dealt with a bout of mastitis a couple of weeks ago.

When I was pregnant, friends asked if I was looking forward to breastfeeding and babywearing a newborn again. To be honest, I’d forgot what it was like. Once I’d adjusted to the news that we were having a third child, I mostly focused on the idea of having just that, a third child. I hadn’t really thought that much about what having another baby would be like. I feel like I’ve spent most of this month drinking in her baby smell, delighting in the light weight of her, staring at her sleeping face and playing with her tiny toes.

How could I have forgot any of this? And how can someone we’ve known so briefly seem like she’s always been a part of our family?

PS: The TotsBots nappy Delilah wearing is the Annabella Floral Easyfit Star, a special edition print by Joules. It’s a handy one-piece nappy system and so far, no leaks. It was sent to us by TotsBots – a pretty addition to our nappy stash.