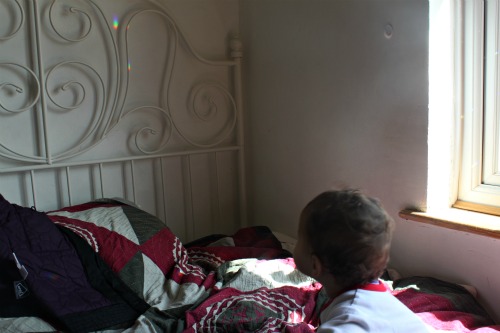 A friend told me that the “problems” you face with your children don’t evaporate. They just keep changing. This is so true. I’m finding that now that Talitha can crawl, stand and even walk while pushing something, I don’t need to hold her quite as much – a relief.

This does not translate, though, into me not needing to entertain her most of the time. So, we do end up with a lot of pick me up put me down, which is fine, but distraction is always welcome.

So the day is a long sequence of Talitha emptying the contents of a bag or splashing in a bowl of water while I wash up for, if I’m lucky, a few minutes, until she tugs at the leg of my jeans full of fuss. If she could say “bored” she would. So I can use all the help I can get.

This rainbow maker is our current distraction. When I selected it from Find me a gift I thought it looked pretty cool. It was the kind of thing we’d enjoy but wouldn’t buy ourselves. I generally think that’s what constitutes a good gift.

When it arrived, it did not look impressive in the box. In fact, it looked quite cheap (despite being marked at £24.99) and I doubted that it would actually do anything or have any noticeable effect.

Still I put it up, in hope. It caught the light right away (it needs direct sunlight) and its solar panels got turning. Suddenly there were bits of rainbow spinning around Talitha’s bedroom. She went from grumpy to transfixed, following the light with her eyes everywhere.

My photos sadly don’t do the actually rainbows justice. Take me word for it that they’re really cool.

It’s not a necessity, by any means, but it’s a cute touch for a baby’s room. Actually, it’s just the kind of thing I would have loved for my room as a teenager. Sadly, we’ve had a lot of cloudy days recently so we haven’t got that much use out of it yet. That’s Britain for you.

I’m also finding it a bit tricky putting it somewhere where it can catch the light but where Talitha won’t try to grab it. It’s definitely not meant for little hands – fragile with too many choking hazards attached. The Swarovski crystal which refracts the light is pretty itself so I don’t blame her.

I can see this becoming a good tool later on for when I’m trying to explain rainbows and light refraction to her, actually. So I guess that will be another distraction for a future developmental stage too.

Find me a gift sent me a Swarovski Crystal Rainbow Maker to try out.