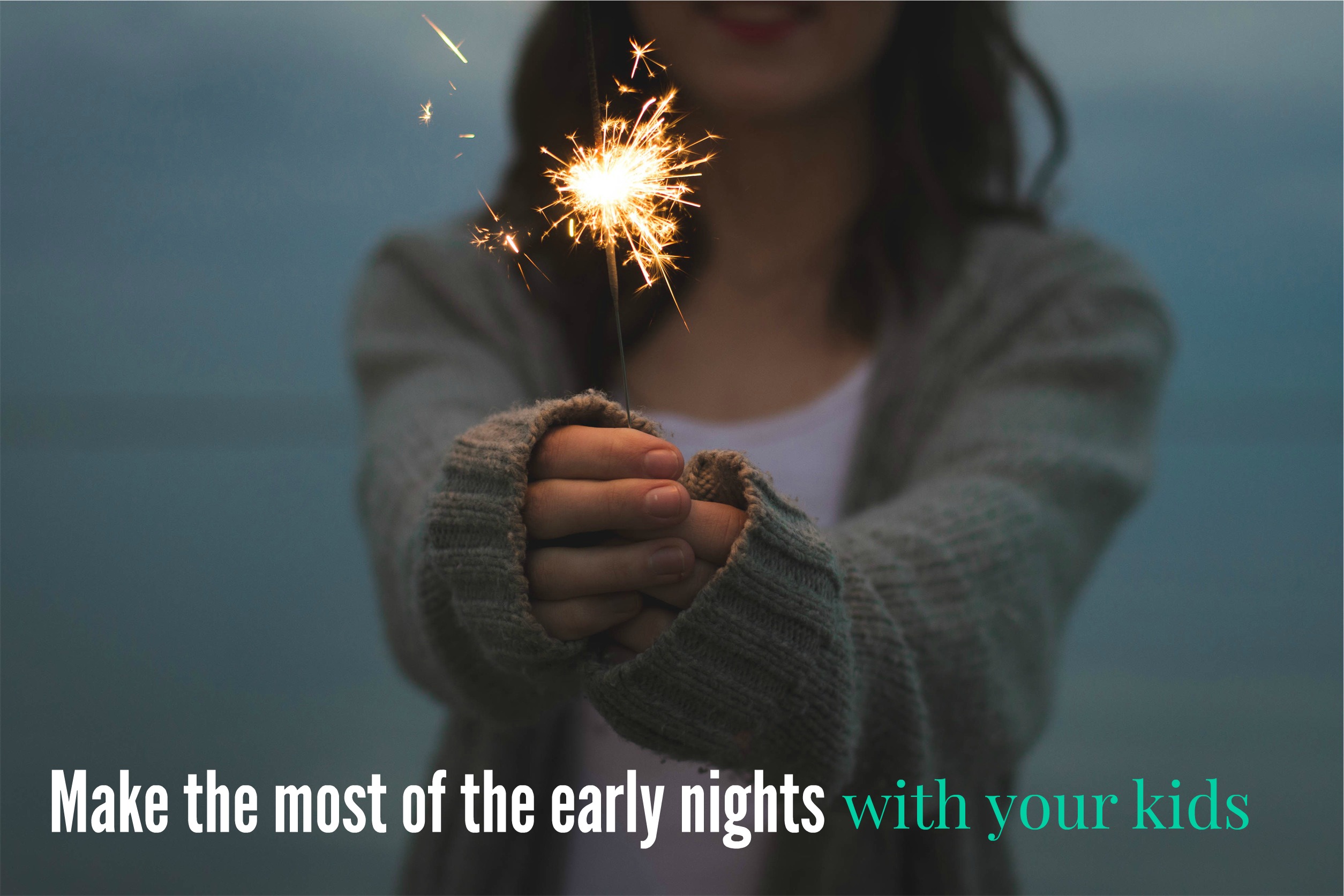 The clocks go back tomorrow (I actually had to look that up because I keep getting confused which way it is) so, we’re headed back into the darker portion of the year. I used to really struggle with this.

Growing up in the tropics, I mentally prepared myself for cold seasons when I moved here but nothing could have prepared me for the dark.

After ten years of living here, though, I’ve realised that even the early nights have their own charm, especially when living with a four-year-old who’s intrigued by the changing seasons.

Here are a few really simple ideas for making the most of the early nights.

Candle time
This time of year is all about the candles. The candle holder makes it’s way back on the table and the lantern is re-filled. Storytimes and supper time become candlelit.

And of course, there are pumpkins and Advent candles to look forward to. Halloween isn’t really a thing here so we keep our pumpkin lanterns going for quite some time. These stars were last years creation. Can’t wait to get this year’s pumpkins this week. I’m toying with the idea of drilling holes in them.

Another great way to have fun with candles is to make tea light holders out of jars. Kids can paint them, decorate them with paper, leaves or cloth or melt crayon wax on them. This year we’ll also be making our own Advent calendar candle.

Backyard Bonfire
Build a bonfire in your backyard. You could wrap cheese sandwiches in foil and toast them, stick some sausages on there or, if you’re looking to do something a little bit different, make some s’mores.

Certainly Wood sent us a gourmet s’more making kit as part of their Get Outdoors with Smores Campaign. The kit included artisan handmade chocolate and marshmallows and a British equivalent of the Graham Cracker by chef Felice Tocchina, along with a campfire kit.

A little disclosure, I never got to taste the chocolate because one of my kids (identity semi-hidden to protect the not-so-guilty) ate it all before I got to it. I gather it was yummy!

And another bit of honesty, we actually had to search the Internet for instructions on how to make s’mores! Any American readers are welcome to laugh at our expense at this point.

Friends were coming over so we had an Autumn barbecue followed by getting the fire going and toasting marshmallows for our “biscuit sandwiches” (that’s how we explained it to the kids).

It was good fun as an activity and getting all the bits together in a kit would be a great gift idea if you were looking for something different, I reckon. Laurence mentioned that flamers were the best he’s used and that, in his limited experience, they’re far better than the horrible ones you get from the supermarket.

Shadow puppets
I loved playing with shadow puppets as a child. I have fond memories of making them with my brother and I’m guessing he must remember because when Talitha went to stay there a couple of weekends ago, he made some with her. In fact, he and my sister-in-law did so many things with Talitha in the short time she was with them, she probably wonders why all weekends aren’t like that.

Anyway, she brought these home and was sort of merrily shining a torch at them and having fun enough but when I showed her how to actually project them onto the wall, it was a total lightbulb moment. She and Ophelia have been playing with them ever since, roaring at each other.

My mum gave them these cool little torches which don’t use batteries. You recharge them by squeezing them lots. Ophelia’s is a pig and Talitha’s is a cow.

Glow-in-the-dark
If you have kids who go to bed early, now is the perfect time of year to get the glow-in-the-dark stuff out. You never really get the full effect of these things if it’s even a little bit light so now that it’s getting properly dark early, the fun begins.

I’m waiting for some glow-in-the-dark googly eyes to arrive for some crafting fun but in the mean time we’ve been testing these glow-in-the-dark wall stickers we were sent by JR Decal Wall Stickers. It’s a 45-piece set with stars and a moon. They’re really good quality and surprisingly bright. Apparently you could put them outside.

I put them on the cupboard for this photograph as I didn’t want to risk waking the girls by taking pictures while they’re sleeping but they’re about to make their way to their bedroom for even more glow-in-the-dark fun. The great thing is, you can’t really see them at all if there’s any light so when it goes dark, it’s a real surprise!

Nocturnal animals and star gazing
A huge advantage of the nights drawing in is that little ones with early bedtimes can get out at tea time to look for nocturnal animals or at least signs of them. This is something we wanted to do last year but never got around to it. I really hope we do this year.

I’ve even saved the print out The Woodland Trust sent Talitha last Autumn so we can go listen and maybe look with our red torches and have an idea of what we’re trying to spot.

Even if we don’t spot a thing, getting out properly looking at the stars is always a good idea.