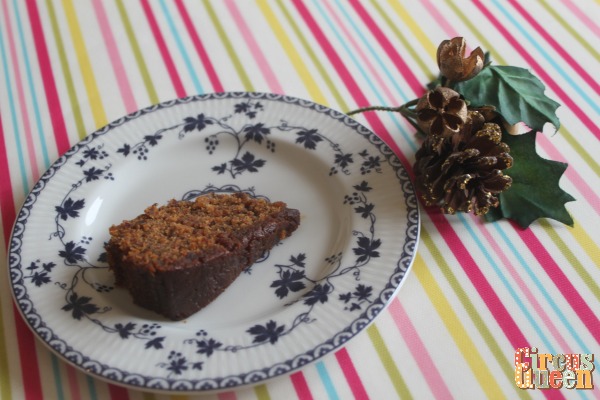 In a way, Christmas started a month ago for us when we soaked the fruits for our Trinidad black cake. I’ve looked at lots of recipes for inspiration over the years but needed to use things that were readily available to us and to make it both wheat and dairy-free. I thought I might as well make it gluten-free altogether. The result is a cake that is lighter than your usual Caribbean black cake but I like that. All the flavours come through without feeling it’s too rich to handle.

Mix the fruits together in a large bowl, mix in the liquors, soak overnight or months in advance.

When you are ready to make your cake, blend the drenched fruits until the are a chunky paste.

I agonised over what to replace the butter with. I considered replacing it with goat’s butter as it’s the one dairy item Laurence can tolerate but, man, it’s expensive and I rather fancied making this cake entirely dairy-free. So, I settled on olive oil, terrified as I submitted the fruits I’d lovingly soaked to an experiment. But – you know what? – it worked! As I said at the start, it makes it a bit lighter and that’s turned out to be quite a nice thing.

Line your baking tins with baking paper. Pour the boozy goodness into the pans and get them into the oven for a bake at 120C in a pre-heated oven for about 4 hours. Check it at 3 hours, though. A chopstick (or whatever) through the middle should come out clean.

Feed the beast! Pour on the alcohol! Some people chuck a whole bottle of dark rum over this baby in the course of many hours. I admit I was a bit lame this year and settled for a few tablespoons when they had just come out of the oven. I’m not tolerating alcohol well at the moment (some weird pregnancy thing, I guess) and black cakes I’ve made in the past have made people feel a wee bit tipsy. I may well drizzle on a little more before icing it though.

Which brings me to icing. It’s not a Trini tradition to ice Christmas black cake unless it’s being made for a wedding but Laurence loves Christmas cake with icing so we’re making a compromise. I’ve bought some marzipan and ready-made royal icing so will be brave and give those a go. I’ll update this post with the results later. The marzipan goes on tomorrow.