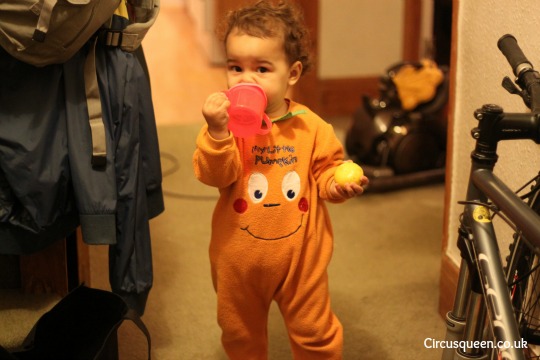 Yesterday we celebrated our first Halloween. I say our first because I feel like this is the first one we’ve participated in. Sure, Talitha was alive last year but I must have still been in that “new baby” daze because I can’t at all remember what we did.

Growing up, Halloween was not something we touched much. I explained in a guest post on WAHM-BAM earlier this week that it was an American thing, not really part of Trinidadian culture when I was growing up. I went to the odd costume party or Halloween gig as a teen but the whole Halloween scene wasn’t what it is over here. A walk down our local Co-op aisles and it’s been clear, Halloween is big business.

This year we bought into it. Kind of.

Our breastfeeding group meets on Wednesdays so we had a Halloween party. I baked a toddler-friendly squash and cranberry bread, based on this recipe but without the pecans. It was surprisingly yummy. There were other bits to nibble on and everyone dressed their children up: skeleton, pirate, spider, ladybird and lots of pumpkins.

Talitha wore a pumpkin suit that came in a bundle from my aunt of clothes my cousins had worn. I was so glad she managed to keep it clean all day because she was admired by the parents of trick-or-treaters who came that night. This brings me to another first…

I’ve never given anything to trick-or-treaters before. I usually turn out the lights and ignore any knocking or bell ringing. Yesterday, Talitha napped for a crazy three hours and I fell asleep for the second half of that with her. That meant we woke up in the dark at 5pm. I worried that I’d missed the trick-or-treating. I worried mainly because I’d bought a bucket of Cadbury’s chocolate covered candies that were disgustingly oversweet and didn’t want to be stuck with them!

It was also raining outside so it seemed unlikely that anyone would come. An hour later, the knocking started and a pair of ghosts in raincoats turned up. Then witches, pirates, zombies and princesses appeared with their parents. It really was great fun popping sweets into their buckets and admiring their costumes. Talitha seemed to catch the buzz of it.

All this leaves me with a dilemma. Part of the reason we ignored Halloween when I was growing up was that we were Christians. I still am and so is Laurence and we’re not really sure what to do about Halloween.

On one hand, it definitely has a darker side to it which seems at conflict with the Biblical command to focus on things that are pure, good and lovely. It is also a night which celebrates witches, contact with ghosts and such things when the Bible prohibits dealing with the Occult.

On the other hand, for children it is just a bit of fun getting dressed up and going around collecting sweets from neighbours. There’s even a bit of community spirit to it.

My parents didn’t have the quandary we have in making this decision. Our cultural context meant that Halloween could easily be bypassed. For us, telling Talitha “No Halloween” will risk her feeling like she’s missing out and I honestly wouldn’t want that. I’d want her to enjoy the fun.

So, the question for us is, how do we navigate this day in years to come without compromising on our own beliefs? Perhaps, we will have to take it each year and ask God for wisdom.

Finding “balance” and letting it go

I didn’t grow up with Advent

Hearts for Halloween – Lanterns of Hope for Those Living in Fear

Observing Good Friday with a toddler