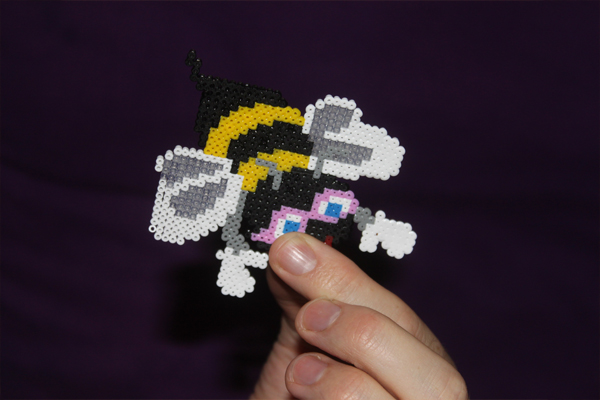 While Talitha napped (!) one day, I fancied doing something fun with the time instead of stealing an opportunity to wash dishes/hoover/do a million other things I probably should be doing. So I got out a set of Hama Beads sent to me by CraftMerrily.

Creating with Hama Beads involves following a pattern by placing beads on a board. In this case, the beads were so tiny I used a pair of tweezers to place the beads. It’s kind of like cross stitch, without the stress of having to rip thread out if you make a mistake – which I did.

Of course you’ve also got to be careful not to tip over the design or you’ll have to start again, which I also did. Thank you, pussycat.

I think the fact that I even contemplated doing this shows that at almost five months, life with the baby is beginning to settle. Kind of. At the very least, I’m regaining enough mental space to count and tell colours apart – not skills to be sniffed at.

This is what I got done in the first sleep cycle:

The next sleep cycle was a bit more productive:

By now I was gathering speed having gotten well into it and obsessively trying to finish it. So a stint in the baby gym and the first cycle of a second nap later:

Sadly, that was all the napping we were going to get done that day so I finished the rest after she went to bed for the night.

A bit of ironing and le voila!

This is Laurence’s hand. I do not have man hands. I think.

Hama Beads are addictive. Now that I’ve done one design I can’t wait to try more. I’m even thinking of getting evangelistic and buying a set for my mum so she can give it a go.

As for the bee – I want to do something with it in Talitha’s room. Maybe it’ll be a part of the alphabet we’re making for her. “I” is for insect? Is that too tenuous? “B” is already taken.

This is not a paid post but CraftMerrily did send me a set of Hama Beads for review. Obviously, I’m not anything if not honest.