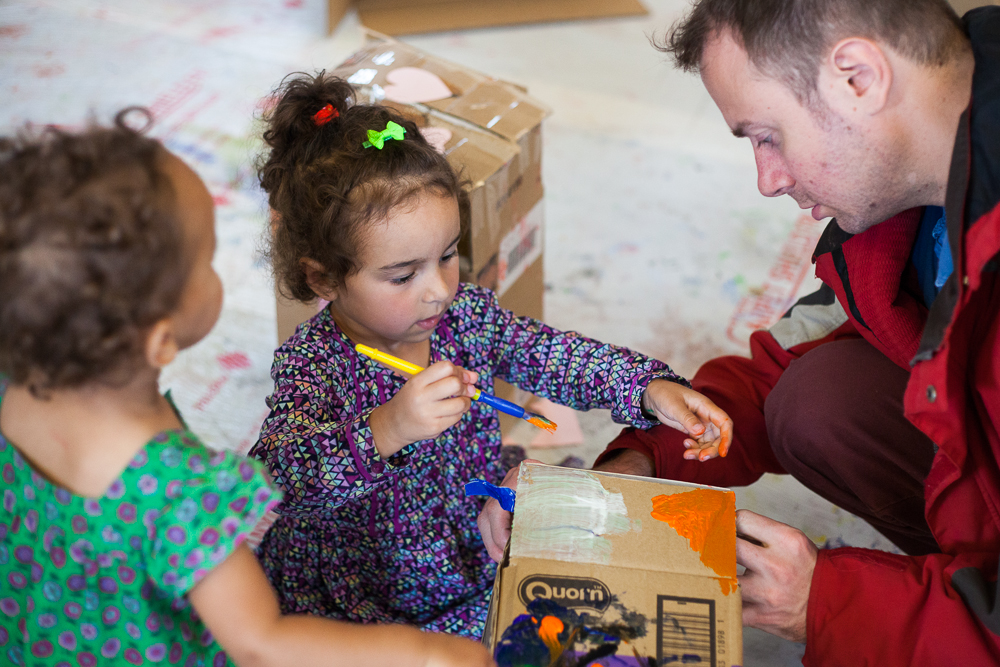 We’ve spent the past few days doing two pretty random things: finding non-musical objects to make music with and singing “Do a little poo in the forest” to each other. We’ll have to blame the gigs we’ve taken in at Hoo Haa! Festival at Colston Hall in Bristol last week.

The first I’ll explain in a minute but the second definitely requires music video explanation. Do show your kiddies this. They’ll love it – and so will you if you’re into toilet humour.

On Friday we had Laurence’s brother with us (he normally lives in Thailand) so we all headed down to Hoo Haa! to check out Kid Carpet and The Noisy Animals. It was a show described as “a punk rock musical following the adventures of gorilla, bear, hedgehog and badger as they make friends, cause mischief, contemplate the world and rock out at the grand dance contest.”

It was, in fact, one of the most gloriously weird things I’ve ever seen. I knew I was going to be blogging about it because Hoo Haa! had given us tickets but at one point I leaned in and whispered to Laurence, “This is insane! How the heck am I going to write about this?!” He shrugged and said it sort of reminded him of The Mighty Boosh.

Essentially it’s a man playing with some toy animals, singing some crazy songs and messing around with some audio visual tech. It’s brilliant and you could see that the kids (adults too but kids, especially) loved it. The fact that I’m merrily humming the song in the video above as I type this probably says it all.

Afterwards, the kids had some fun putting together a building for a cardboard city. There were some pretty inspiring builds. We’ll definitely give this another go at home.

The day before, we made it down with my parents and saw Paka Piki Music. British experimental folk artist Rachael Dadd played “instruments” that ranged from a banjo to a carrot to a toothbrush. Her bandmate Japanese artist ICHI wore what I think was probably an ant-head mask and played an equally eclectic range of objects. I loved that they included the steelpan in their lineup. Any opportunity for my kids to hear that instrument is exciting for me as a Caribbean migrant.

Both girls were absolutely spell bound during the performance. Talitha had lots of questions spilling out afterwards and she jumped at the chance to get play long, knocking chopsticks together. I would go see them again and again and again.

Talitha also got to play with some fruit and vegetables wired up to a computer, experimenting with them to make music.

There was so much more on, including a classical concert for babies and toddlers, a beatboxing workshop for all ages, a poetry battle for over 10s and a disco. I wish we’d been able to make it along to more but even the little we saw gave us all a taste of something different this summer.

This was Hoo Haa! Festival’s first year at Colston Hall and I hope it returns next year but even if not, we’ll be keeping our eyes peeled for other events there. In fact, my parents have bought tickets to take the girls to see The Tiger Who Came to Tea there later this week.