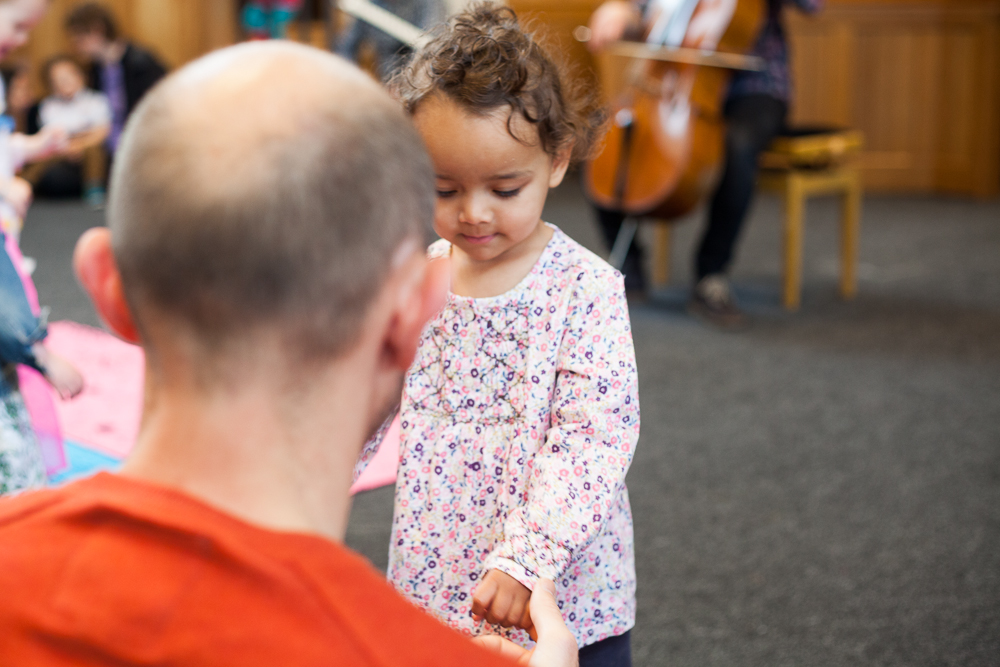 Children are naturally fascinated with musical instruments. Certainly, most who visit our house want to have a go with my guitars hanging on the wall. From early on, we’ve talked with Talitha about what instruments we can hear in any bit of music we’re listening to. She’s particularly fascinated if she can pick out a steelpan as she knows that comes from Trinidad and Tobago, where I’m from. Often, we’ll look for pictures of instruments or YouTube videos of musicians playing them so we can get a closer look.

We’ve been to a fair few gigs with the kids (one of the benefits of living in Bristol) but it’s been on the cards for a while to check out Lilliput Concerts, which offers classical music directed at the youngest of audiences and their grown ups. This Saturday we went along to their “Music for Cello with Jonathan Rees” at Redland Park United Reformed Church in Bristol.

The audience consisted of babies in slings to four-year-olds and they were all welcome on stage to get up close and personal with the musician and his instrument. Brightly coloured mats were placed on and just off the stage, with stuffed notes lying about for little hands. Parents were in chairs or on the floor with their little ones and if the mood struck, children danced on their own or with friends and parents.

Rees played selections from Bach, Britten, Barber and Cassado. A lovely mix of Hispanic melodies and dreamy tunes. He chatted with the children between pieces, engaging them with the music and the instrument and even letting them choose what he’d play next.

Ophelia was very obviously taken with it from the start, moving with the music, clapping to the beat and drinking it all in. Talitha took a while to warm into things, not keen on dancing or even getting up close. By the end, though, she grabbed her little sister’s hand and planted them directly in front of the cellist and she cued up at the end to feel the back of the cello while he played a note.

At the end, there was tea and cake and Talitha wanted to know what the instrument would be at the next Lilliput concert and whether we could buy tickets now! So I guess that’s June 12th sorted for us, then! It was well-timed too as she was off to her music class right after so I imagine she had a few things to tell her teacher.

We’re delighted to have been guests of Lilliput Concerts and are officially hooked! Do check out their Facebook page. We’re especially taking our youngest listener to see them at Hoo Haa! Festival at Colston Hall this year.