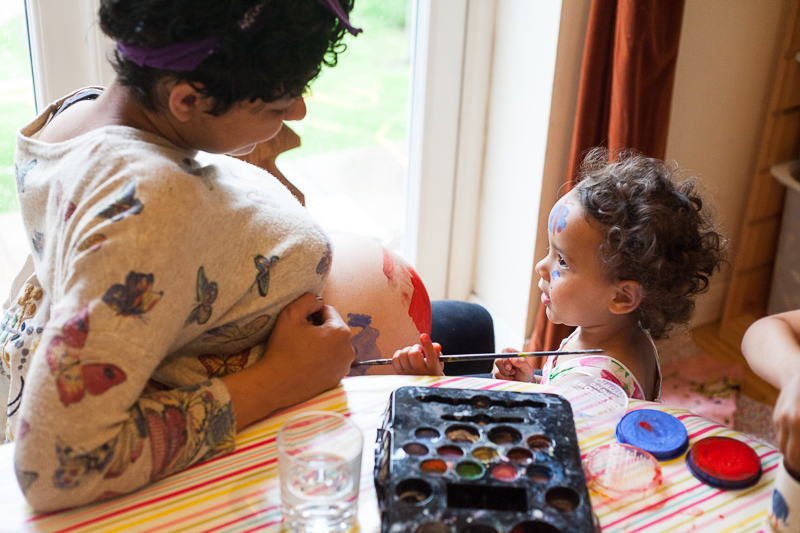 I’m 39 weeks pregnant tomorrow and the children are keenly aware that the baby is coming soon. On the whole, I’ve worried less about what this transition would mean for them than I did when I was pregnant with Ophelia. Back then, I wondered if Talitha would feel displaced and was genuinely concerned about being able to give them both what they needed. Now I know that a certain shortfall is inevitable and I’ve seen how much my children have benefited from having each other.

Adding a third brings its own questions. How will my now middle child react to no longer being the youngest? Will I inadvertently expect more independence and responsibility of my eldest than she’s ready for? Will our home be totally chaotic? Yet, I’m safe in the confidence that I really will love them all, we will muddle through and that these three sisters are already invaluable to each other.

I’m by no means an expert in preparing children to meet a new baby but I thought I’d share a bit of what we’ve done. I’d love to hear your ideas too.

This is 2.5-year-old Talitha and I’m struggling to believe she was this ever this little!

Show them their own baby pictures
When we were expecting Ophelia, I had a toddler-sized photo book of Talitha’s baby pictures made so she could see the highlights of her first year and get into the idea of having a baby around. She absolutely loved it and still enjoys looking at it. I haven’t made one for Ophelia (must get on that!) but we’ve been looking at lots of her baby pictures on the computer and in a family photo book we got made the year she was born.

Talk about the baby and listen to what they have to say
While looking at these pictures and just generally as it comes up, we talk about what a baby needs and what we can expect life with a new baby to be like. The girls have their own ideas about what the baby might be doing in my tummy and love talking to her. Now that she really is almost here, Talitha has abandoned calling her “Butterfly” in favour of her name. Ophelia is still calling her “the baby”.

Both of them have wanted to sit on our laps more and Ophelia has needed more holding generally. I remember at this stage in the pregnancy, Talitha started having nightmares and was super-glued to me during the day. They may not be able to articulate what they’re feeling about the change but I’m trying to listen in to what they’re telling me in other ways and to wordlessly reassure them that they still have a place as our babies.

Read books about pregnancy, birth and babies
I read Talitha the book There’s a House Inside my Mummy, which we both found helpful for explaining what was happening. I gave it away after Ophelia was born but she happened upon it in the toddler room at our church and was delighted by it. Mostly, we’ve been reading How You Were Born by Monica Calaf. It’s a beautiful home birth children’s book but the mother packs a suitcase in case she has to go to hospital (as I’ve done) and it’s just generally a positive image of birth. It’s filled with ideas I’d love my girls to grow up with, wherever they decide to be if they have babies later on.

Discuss names with them
We weren’t sure whether to do include them in the name choosing but discussions around a name inevitably happened while they were present and Talitha certainly had opinions. While we’ve made it clear that we will choose the name as she is our baby, just as we chose hers and Ophelia’s we’ve been open to what she thought about the names we suggested. In the end, there’s only one name she’s latched on to and, after a lot of deliberation, we all agreed that that was the one.

Watch birth videos
We don’t know yet whether the children will be present for the birth but we’re open to it as a possibility. The reality of home birth means that they could wind up being around anyway. So, to prepare them, we’ve looked at gentle birth videos, which they’ve really enjoyed. I showed Talitha these videos last time too and although I ended up wanting my in-laws to take her, which they did, it really helped her to connect my changing body with the idea of the baby she’d eventually meet.

Belly painting
Art for children is often about exploration and celebration. I was keen to give them the opportunity to do that by painting my bump with facepaints. Last time, Laurence drew henna patterns on my bump but he didn’t fancy doing it this time and, as it turned out, it was more fun for the girls to paint me anyway. Each had a side.

Pack their bags with them if they’re staying somewhere
They knew that I’d packed a birth bag and a bag for the baby so I’d have everything in one place for the home birth but would also be prepared in case of a transfer. I know some people find it pessimistic to do this but it gave me peace of mind and I really valued having done it last time. It also means that the girls aren’t shocked if I do go to hospital.

The girls were excited to pack their own bags. They got their Trunki suitcases out and I helped them decide what to take in case they needed to go to someone’s house (we discussed the options as we have a few people on call), complete with new toothbrushes – a point for much excitement. I asked them whether they’d rather be here or at someone’s house and they both said, “Both!” so at least they’re open to every possibility too.

Let them help get the baby things ready
They’ve also been thrilled to check out all the tiny baby things. It melted me when they loaded the washing machine with baby clothes, oohing and aahing over how small and cute it all was. They don’t realise they’re still quite small and cute themselves.

Make a present for the baby
I had in mind to get some ideas from Pinterest for baby toys they could make but we just didn’t get around to any of that. In the end, I grabbed a couple of plain items of baby clothing and some very old paints from our baby shower with Talitha (binned them after as they really don’t work well anymore) and they had a brilliant time painting them. It’s going to be hilarious dressing the baby in them!

Buy presents from the baby
Finally, this is not really “beforehand” preparing but it’s a nice way of introducing them all to each other. I’ve bought Ophelia a Grimms wooden rainbow as she’s rainbow obsessed and I think she’ll have a lot of fun with it and Talitha a Maxamorra hooded onesie because she’s been asking for a hooded onesie for ages. When Ophelia was born, I bought Talitha an IKEA wooden train set as a gift “from the baby” and she actually wasn’t that interested in it at all. She was much more taken with her new baby sister but I think it’s a sweet way of celebrating this new stage in family life.