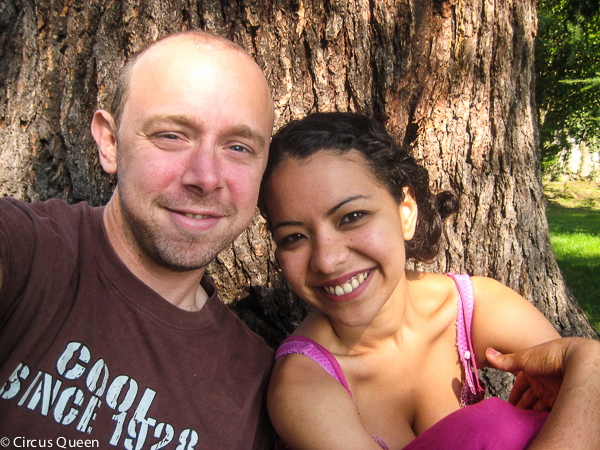 Laurence and I took a marriage preparation course back when we were engaged (the image above is from our honeymoon when we were loved-up enough to be at ease with couple selfies).

One of the activities was to take a quiz to find areas we needed to discuss. When we went through the results with the couple who were mentoring us, every statement regarding finances was highlighted as an area we’d disagreed about or just weren’t settled on.

It’s come as no surprise, then, that money has been a major stress-point for us in these five years of marriage.

We may not have gone away after the course and ironed everything out neatly but we have learned a few things amid the hand-wringing. Credit cards have especially thrown some learning opportunities at us. Here are a few simple but easily forgotten ideas that we try to keep holding on to.

Make a list
Make a list together of everything you’d like to have your credit card available for. We decided from the start that ours would be for emergencies only, partly because I don’t work full-time.

Yet, because we’d not yet defined what that meant, “emergencies” began to encompass things like pub lunches and train tickets for social visits. Uhh, not what we’d planned.

Making lists separately and comparing them helps to really figure out where we both are on this.

Discuss priorities
Of course, what we’re really talking about here is the bigger issue of defining your priorities as a couple. So, maybe a new dress isn’t a priority.

On the other hand, we both have close family who live abroad and, without being macabre, should anything happen to them, we’d likely use a credit card to get out there in a hurry if we needed to.

Think about alternatives
We’ve even got imaginative with this and sought alternatives when things have come up.

For instance, when we were in Trinidad, the friend who was housesitting for us thought that our fridge had given up the will to live. We actually, seriously considered living without a fridge for a while.

Have accountability
This is so helpful for keeping the credit card bill in check. If there’s no sneaking around, surreptitiously bunging something on the credit card then we’re a lot less likely to put crap like gig tickets on there. Rather, we talk to each other before we decide to buy anything with it.

We even, literally, froze it once when we were fighting to get our debt back under control. My brother found it hilarious when he found our credit card in our freezer, locked in a block of ice. I assured him it was “a thing”, thinking he was lucky not to come across a placenta in there, frankly. At least it meant that we had to make a joint decision to melt the block of ice before using it.

Budget together
Of course, credit cards aren’t free money, though they can feel that way at the time. So there needs to be a solid plan in place to repay them.

We’ve found that when just one of us does the budgeting, the other feels like they don’t have enough of a say or enough control of the situation and just ends up feeling resentful.

When we sit down and go through what we’re spending money on, how much we’re both bringing in and how we’re going to manage it all – boring as it is – we’re generally a lot happier with each other.

Five years ago in marriage prep, I’d never have pegged budgeting for a good date.

In Association with Santander

Who comes first, my spouse or my child?