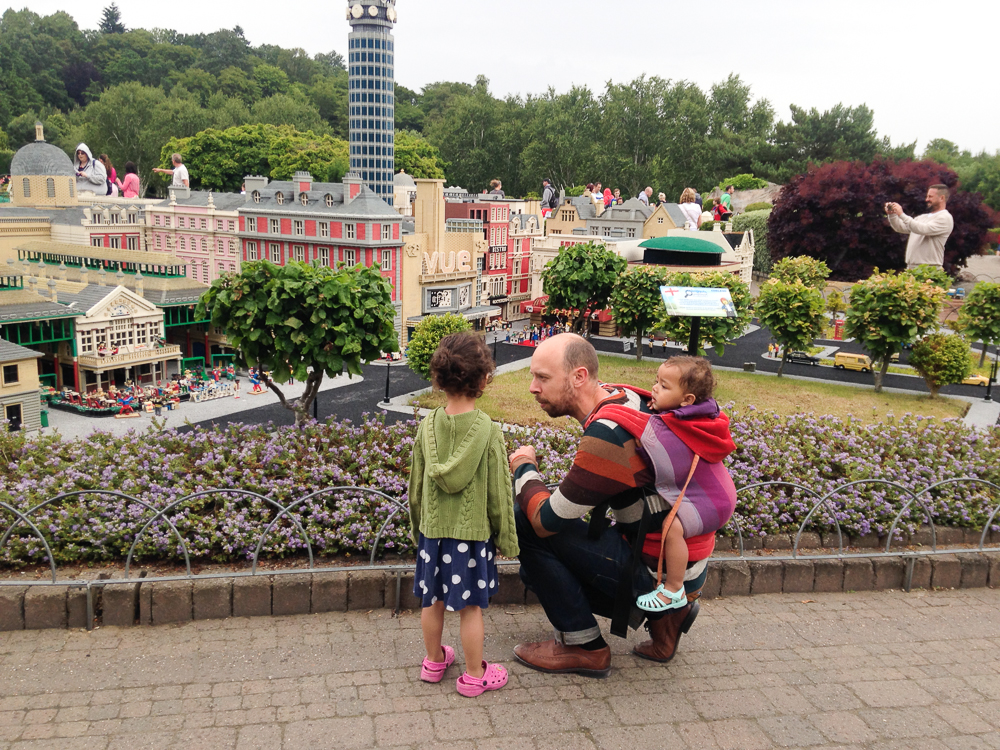 I just looked back at my last “life lately” post and realised that I had a stinging headache when I was writing it. Here I am writing another with a headache! What gives? It just feels like I haven’t been here very much recently. I have so much I want to blog about but blogging during the day is mostly impossible and, with the sunshine, the kids are going to sleep later. By the time they’re down, I kind of just want to sink into the sofa and watch TV. And so I do. But I’m hoping a little catch up post will help me get back into the swing of things.

Legoland
I’d heard so much about it and it certainly delivered. We went on a Sunday which I guess would normally mean that it would be heaving with crowds except that it was a mostly rainy day. For once the British weather worked in our favour. Both children – ok, and the adults – were pretty wowed by the creativity that’s gone into the place, especially Miniland (pictured above).

I don’t think we could go again before Ophelia is four as she was too little for most of the rides. This was pretty convenient for me since a trip on a Ferris Wheel pretty much convinced me that theme parks aren’t my thing. I thought I concealed my “freaking out” quite well for the sake of the children but when I told Laurence this, he said: “Then you must have really been freaking out because you didn’t seem that calm.” Oops.

I loved seeing Talitha’s delight when she went on rides and we all had a great time the submarine ride. How bound up my enjoyment has become in theirs.

30 things to do before I’m 30 update
So here I was, thinking that I’ve been cracking through this list but, actually, I’ve only competed three of them so far! I need to get a move on or I’ll be wild swimming in the Autumn! I went WWOOFing, got a tattoo and, most recently, made a floral arrangement from flowers I’ve grown myself from seed.

In fact, I’m bringing in flowers every few days. Sadly my ranunculus (the pink ones pictured that look like peonies) look like they’re done for as I’ve had to give over to black fly. I’m genuinely a bit upset about that.

This really is the year I’ve got into gardening. I love that I’m learning. I find it, mostly, relaxing. There’s a real sense of accomplishment putting together an arrangement or picking food for our supper. Even dealing with the problems and disappointments is stimulating.

Sun Jellies
After being unable to decide whether I liked jelly shoes last year, I finally came to a conclusion and bought pairs for the girls and me. I bought ours from Sun Jellies. They came up a size too small so we returned them all. Sun Jellies were really quick with the exchange. They are so comfy and we all love them. Ophelia grabs them whenever we’re getting ready to go somewhere.

Some like it hot
I got them just in time for the British heatwave too. I’m good at complaining all year around that it is too cold, wet, grey and dark in this country and then complaining about the heat when summer finally makes an appearance.

This time, I agreed that it was too hot to do much but I also felt that that’s part of the rhythm of life – letting the weather slow you down. I also realised that I really need the heat and light. It kind of grounds me. I was starting to get a bit anxious that it would never come. Maybe it’s a sign that I’m suppressing some subconscious homesickness.

I’m still hoping for more sunshine and heat, obviously, but I now feel less stressed about what the weather’s doing. And I now feel like I’ve earned my British citizenship, dedicating this many sentences to the weather.

The Appealing Rabbit
We were sent these cards to review on the blog a while ago and I wasn’t really sure about them. They are so pretty – great design aesthetically, for sure. But I wasn’t convinced of their functionality. Talitha doesn’t always understand where she’s supposed to trace the letters.

However, they seem to work well when she’s tracing with her finger and once she’s been shown the letter shape, she’s usually fine to go from there. She really likes them and they’re a great addition to the playroom, visually.

Camping in Croyde
We went camping in Croyde last weekend with a group of home educating families. It was great meeting and chatting with people who are much further along this path than we are and lovely to get out to that part of the country. It’s actually only a couple of hours away from Bristol so we must do it again.

Laurence got to surf a little bit but the conditions were a bit rubbish. He managed to introduce Talitha to bodyboarding, though, which was well worth a trip to the seaside. We both really hope she loves the sea. It’s too easy not to get enough exposure to it when living in a temperate country.