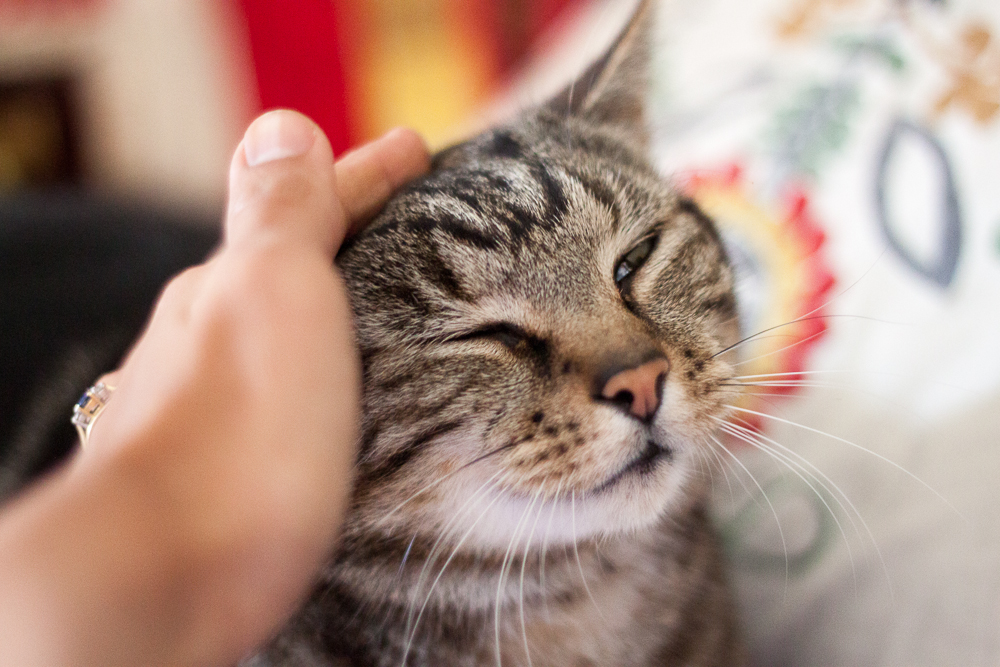 Back when I was heavily pregnant with my first baby, I was overcome with this incredible urge to get a pet cat. I’ve met a few other women who’ve had the same so I’m using anecdotal evidence to declare this “a thing”. Maybe it’s the nurturing hormones?

Anyway, a friend knew someone who’s cat was having kittens so I went around and had a look. Then I wound up going home to convince Laurence we should get two cats. Because, y’know, one might get lonely. Even though I wasn’t out at work and was about to introduce another human to the home at the time. Of course.

So we ended up choosing the stunning tabby he wanted and the tiny black female I couldn’t resist. He named the grey tiger Bojangles (after a nightclub in Jamaica) and I called the black cat Hero (which is totally a girl’s name, already rejected as a potential name for the baby we were having).

The thing is, I brought them home probably a month or two before having Talitha, so they’ve pretty much never had the run of a child-free house. From the start, they loved sleeping on my baby bump. I wish I’d got a picture of that. I remember Bojangles perched on my side when I was in labour with Talitha – he was small enough not to be annoying at the time.

I kind of think it was a bit symbolic of what was to come. Clearly, they were and have had a special relationship with both of the girls. But all of them, the children and the cats, prefer me to Laurence a lot of the time, which means they have to share and have a habit of getting on each other’s nerves.

Animal welfare charity RSPCA asked me to share my cats’ pet hates as part of a campaign they’re running with MORE TH>N Insurance. For each pet insurance policy sold, £20 will be donated to the RSPCA for the care of unwanted and neglected animals in England and Wales. MORE TH>N can cover all your dogs and cats in a single policy and you’ll be eligible to receive a 10% MultiPet discount.

It’s not hard thinking of a few things Hero and Bojangles would put on their list of #PetHates:

When a small child takes the lap you were just thinking about curling up on when there’s another perfectly good adult lap they could have chosen. Perfectly good – for them.

When a small child takes your favourite spot on the sofa. Every time.

When there is too much love.

Seriously, sometimes the love can be. Too Much.

When a small child offers to feed you and spill half the cat food outside the bowl. #ungrateful

When the small children are allowed upstairs but you’re not. :-/

That sound the smaller one makes quite a lot of the time, usually meaning she wants to be picked up.

When you’re in the middle of a good dream and a small child decides it’s stroking time.

Do you have pets? What have they been like with your kids?

In association with the RSPCA