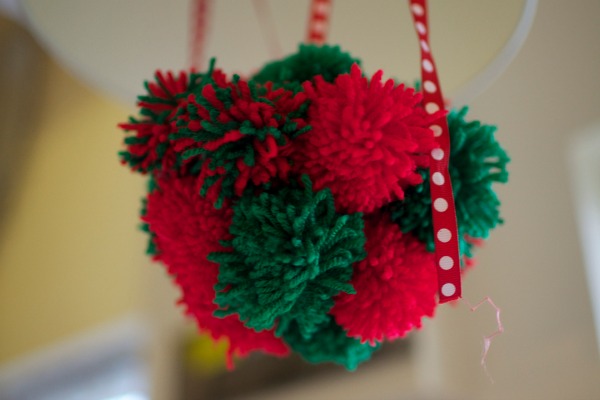 Mistletoe doesn’t grow in the Caribbean so it’s curious that it’s part of our Christmas iconography, along with snowflakes and “Deck the Halls with Boughs of Holly”. In fact, I’d never seen real mistletoe until the first Christmas I spent with Laurence’s family. While we grew up with Mistletoe in our storybooks and cartoons, kissing balls were more appropriate and accessible in reality. I remember the year my mother made one with sweet little rosettes. And now it’s my turn to make one for our home. So I made this festive kissing ball with homemade pom poms. Well, my toddler helped too.

First there were reels of yarn she insisted were hippos, though why she’d stand on hippos I never got out of her.

Following this technique for making pom poms, I wound the yarn around three fingers 100 times before cutting it.

Then I tied the yarn together with another bit of yarn.

I snipped all the loops and there we go. Delightfully messy pom poms.

Talitha wanted to have a go too but I had to do it really quickly so she wouldn’t get bored.

We even mixed the colours. Two bits of yarn at once wrapped for 50 instead of 100.

I crumpled a piece of newspaper and taped it into the shape of a ball and tied a ribbon around it.

And stuck the pom poms around it with a hot glue gun.

Hang the creation and there we go… Christmas Kissing Ball!