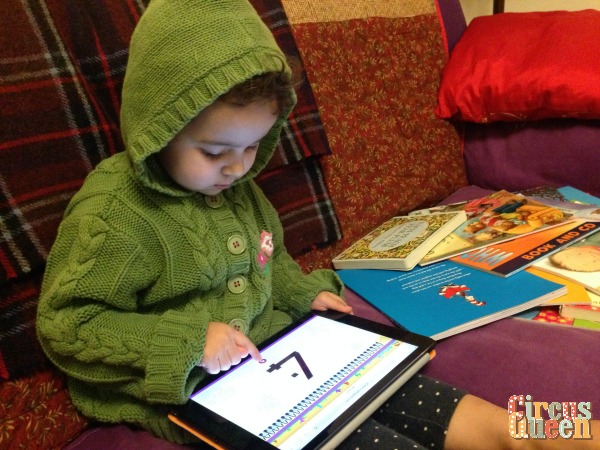 I first heard about Reading Eggs when I was stalking home education blogs for reading resources, more out of curiosity than anything else. Talitha was two-and-a-bit at the time and I felt a little weird about teaching her to read but she was clearly interested and it seemed counter intuitive to ignore and redirect that desire.

I wasn’t sure about using a computer game series, though, which Reading Eggs is. We’ve always agreed that we’d like her to have a low-media life in the majority so she could spend these crucial years learning through doing real things rather than attached to a screen.

With the caveat that we’d keep an eye on things and limit her use if necessary, I signed her up for a trial. She loved it and, to my amazement, was able to use the program so I ended up purchasing six months when she was two years and five months in November. We’re in a routine now of doing it a couple of times or so a week, which feels comfortable.

So, having had a positive experience with Reading Eggs so far, I agreed to review its sister program Mathseeds when the Reading Eggs company got in touch.

At first I was frustrated that I couldn’t get it to work on any of my browsers! The company helpful with technical support, though, and we were soon up and running. I’m not sure why there was problem other than that the animations are more complex than the Reading Eggs ones and possibly more prone to hiccups. For some reason it seems to work a lot better on the iPad.

It’s all been smooth since then. So far everything seems pitched at a good level for Talitha. She’s currently two years and eight months. She doesn’t always understand the point of the games in the first go but that’s fine because I sit with her and can explain or demonstrate. She loves recognising the numbers and their corresponding words. She’s begun to recognise at a glance when there are four of something in a picture or when there’s an odd object in a group.

She sometimes gets a little carried away and wants to make up her own rules though! So, if she’s asked to put four dinosaurs in a jar and then the lid, she might want to only put one in or put them all in, even though she knows how many “four” means. She wants the game to move on so she’ll usually ask me to explain again what she needs to do.

She just isn’t ready for the “Memory” game where she has to turn over the cards and match them so we do it together and skip on to something else she can do. Some of the “Playroom” which is a section of games outside of the lessons involves mathematics too complex for her, which suits me fine because once she’s done a lesson, we move on to something “real-life” like her shape buttons or baking.

I’m always watching out for frustration or boredom as I’d rather she didn’t play it if it stresses her but it doesn’t seem to at all and she’s surprised me again and again with how much she’s learned from it so far.

Obviously, we’ve started a bit early. The age range for Mathseeds is 3 to 6 years. And I have a code for you! Enter “UKB26MST” for a 4-week extended trial.

Reading Eggs sent me a free, extended trial for the purposes of this post and I’ve reviewed it as honestly as possible.

If you like Circus Queen, consider nominating it for Best Pregnancy Blog!

“We need to save the rhinos!” – National Geographic Kids iPad edition