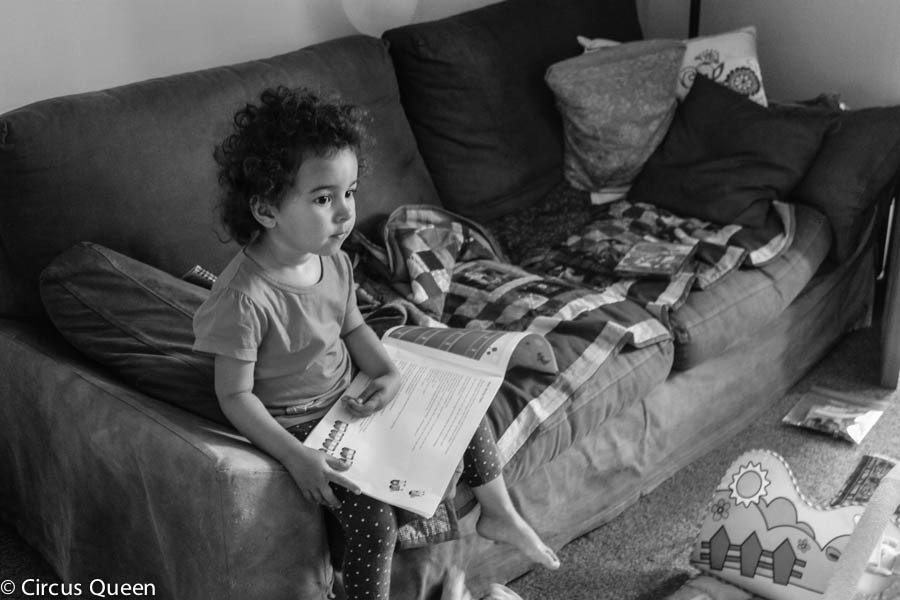 “Sing the quaver song, Mummy.”
“I don’t know the quaver song.”
“Yes you do.”
“Umm… Quaver racing, quaver racing, crotchet racing too.”
I find that I do, in fact, know all the words. I’ve obviously been taking in more of the Moosicology CDs than I realised.

Moosicology is home resource that teaches children 0-7 years old the foundations of music theory in an extremely creative and rather fun way. It comprises a book for the kids to look at, CDs to listen to and a grown up guide which explains the rationale behind the course and gives ideas on how to support your children while they explore the materials.

For us, it’s involved Talitha doing her favourite things: looking at a book while listening to music (I’m pretty sure she thinks every album should come with a book), memorising songs and dancing. Ophelia and I will often join in by playing with legs and gently tapping on tummies.

Music theory comes alive through characters, stories and songs which illustrate concepts. I’m recognising things that I painstakingly learned long ago. Talitha is gobbling it all up and requesting it again and again. Of course, she doesn’t know what she’s learning so it’ll be interesting to see if it makes learning music later on easier for her.

I first heard about Moosicology in an article my in-laws snipped out of The Times for me. The premise was that actually learning music before the age of seven carries a lot of benefits for children’s brains. I haven’t looked at any studies behind it so I’m not about to argue for it but the package was mentioned. It sounded like fun and, I felt, was pretty reasonably priced at £67 (it’s now available for a limited time at £47, I’ve just seen).

I contacted Moosicology on the off chance that they might let us review it and they did! So that was Talitha’s main birthday present. She loves it and I’ve been so impressed by how cleverly conceived and beautifully executed it all is. I’m looking forward to seeing whether she will start recognising musical concepts and whether there will be any long term effects for both of them.

For now, exposure and enjoyment is enough. Considering that she plays it almost every day, we’re certainly getting both in good measure.