More olives in our cooking 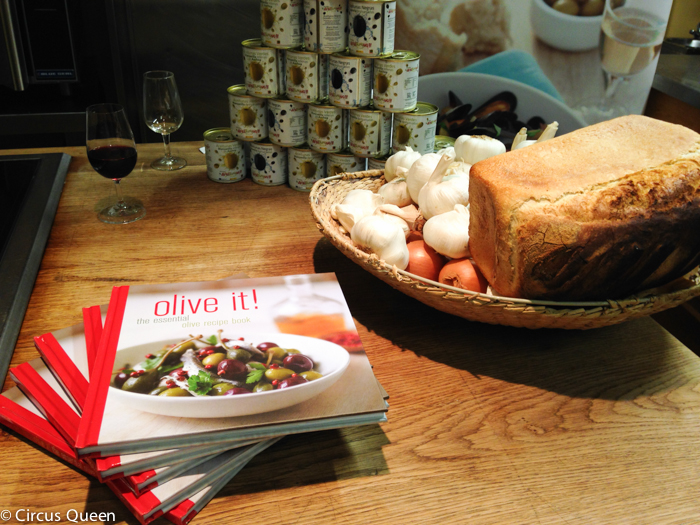 With the craziness of Christmas and New Year, I’m only just getting around to telling you about the Spanish cooking class Laurence and I took last year. Well, that’s misleading. He and Sian of The Bristol Eater did most of the cooking and I mostly chatted and drank wine! We were invited to take part in an olives cooking class at Bordeaux Quay Cookery School with Spanish chef Omar Allibhoy of the Tapas Revolution.

We dropped the kids off with my brother and his wife (thanks for moving to Bristol, guys!) and got set for a date with a difference.

Admittedly we hadn’t eaten olives much lately. It’s not something we’d had much imagination for which is odd because olives make their way into a few Trini dishes. In fact, they feature in pastelles, the traditional Christmas cornmeal patties that we ended up making (well, actually, Laurence did!) despite saying we’d give them a miss this year.

It’s safe to say, we love the taste of olives!

Olives also pack a punch, nutritionally. They’re a rich source of Vitamin E and act as an antioxidant and have been credited with everything from aiding fertility to reducing the effects of Alzheimer’s. So, we were keen to work them into our cooking with a bit of re-inspiration.

Omar’s class certainly offered that with a menu that included queen olive-stuffed beef meatballs with tomato and olive sauce (the vegetarians did aubergines), coarse pate of mixed olives, manchego cheese and pistachios, candied pitted olives and cherries in sweet sherry wine, with lots of yummy bread and, of course, wine. We were blown away by all of it (who says food doesn’t taste as good when you’ve cooked it yourself?) but the olive dessert was a particularly pleasant surprise.

The class was well-timed for us because we’d been trying to figure out what to serve up for Ophelia’s dedication. When Omar mentioned that the meatballs could be cooked in the oven, we decided to go for that as we were cooking for lots of people, and it was a real hit. We accompanied it with roasted potatoes and even snuck olives into the salads.

We were invited to this cooking class as part of the Olive it! campaign to educate the UK about olives and get us all working more of them into our cooking. We certainly haven’t needed any more encouragement since.

Do you cook much with olives?

Episode 64
More olives in our cooking