My three babies – The kittens have lost their happy bits 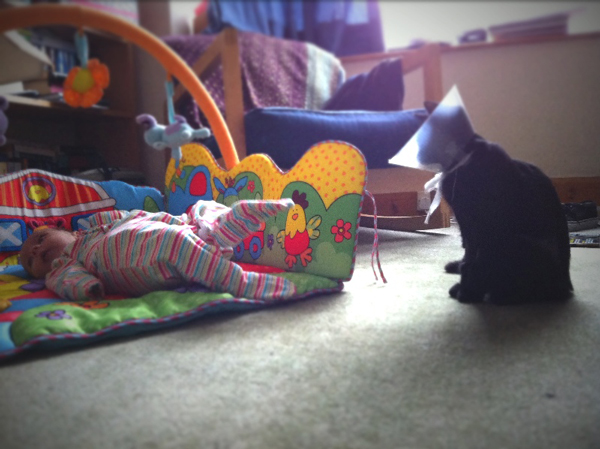 Now I know why when I told everyone I was getting kittens a few weeks before the baby was due they said, “Wow” or “Are you sure?”

I get why my husband kept saying: “It’s a lot of responsibility all at once.” But I’d just point to my burgeoning belly and scoff: “We’re no strangers to responsibility.”

The kittens (or do I start calling them cats now?) have had their surgeries. You know, the ones where we pay to have their reproductive systems snuffed out. Poor babies.

And that’s just it. I have three babies. What was I thinking?

When we first brought them home Hero and Bojangles had my full attention. I measured what they ate fastidiously. They slept in my lap. I let them claw me (and especially my bump) to bits.

I was rubbish at preparing them for what would hit them.

The day we got back from the hospital they weren’t my babies anymore. Their claws were sharp. Their paws had been in the litter tray. They came too close to my vulnerable newborn’s head while I was feeding her.

And their toddler stage had begun. They played with nappies hung out to dry. The Moses basket was forbidden therefore that’s where they desperately wanted to sleep.

Hero decided to wait until I was stuck on a sofa feeding to climb out a window. I had set a howling baby down hurriedly to run after her.

I’ve had to consciously remind myself to stroke them when I’m not holding her, which isn’t often. Their meals quickly went from four to two because I couldn’t hack it.

I’ve now say to myself, whenever I hear them playing with something they shouldn’t: “If I don’t look, it’s not happening.”

But their operations have reminded me they’re still my babies. Look at poor Hero.

Bojangles is fine as ever. Why is being female so difficult regardless of your species?

Anyway, we’ve at least averted one of the concerns some people had so far. The kittens aren’t interested in the baby, just her things. The most they do is go up to her, take a look and walk away. (OK, just as I wrote this, Hero started walking on Talitha. The game is changing, yet again.)

Sadly for them, I doubt she’ll be treating them with the same disinterest once she starts crawling.