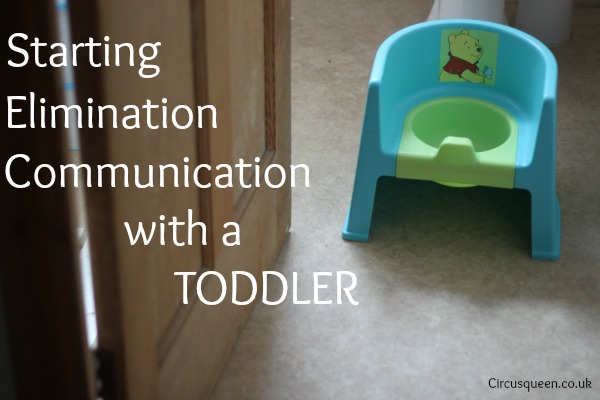 Elimination communication involves catching your baby’s poo and wee in a potty, container or whatever instead of just leaving them to go in their nappies.

It’s probably just what your granny used to do…without the techie name.

I first heard about it back when I was thirty-three weeks pregnant and someone commented on my list of things to do before the birth with a link to “Save on nappies – don’t use them?”

I read that post and my eyes grew wide. Surely this was a step too far? It sounded like seriously hard work. Too crunchy for me.

When Talitha was nine-months-old we went to a sling meet in Bristol and met real people who were practising elimination communication. I was intrigued but unconvinced.

Then last month, I discovered Lulastic and the Hippyshake and fell in love with her blog. I felt like I identified with a lot of what she had to say and, well, what do you know? Her baby is nappy-free. It got me thinking about it again.

Now that Talitha is a toddler, the thought of toilet training doesn’t seem so distant. But the more I consider it, the more it doesn’t make sense to me.

Why would I teach her to go in her nappy for years and then present her with a potty? The only real reason seems to be convenience, though nappies do mean work, especially if you’re washing and folding them. Convenience isn’t really enough of a reason for me.

The more I’ve read about EC, the more it’s made sense to me. The baby grows awareness of her bodily functions. The adults in her life are responsive to her need to eliminate as they would be to any of her other needs.

I know how “out there” this probably sounds because at one point it sounded crazy to me. But this is where I am.

So, I bought and read The Diaper-Free Baby: The Natural Toilet Training Alternative

on Kindle, got a few little knickers and the potty out of storage and decided to make a go of it. The book has a chapter on starting EC with toddlers so I especially focused on that.

How’s it gone so far?

Day 1: We spend an hour in the morning nappy free in uncarpeted parts of the house for ease of cleaning. The aim right now is not to get her on the potty but just to reconnect her with her bodily functions.

She normally wees a lot in the morning but she’s completely dry. It’s nap time so I put a cloth nappy on. She wees immediately. I suspected she would so checked and was right. It confirms what I thought. She doesn’t want to go without a nappy.

That evening after the nanny’s left, we spend more time nappy free. This time she wees. I don’t catch it but I tell her, “You’re weeing, Talitha. You’ve done a wee.” I show her the “T” sign as I’ve decided this will be our toilet sign. She looks down in suprise. This all happens again shortly later.

That evening she clearly wants to poo so I whip off her nappy and bring the potty to her. She is upset because she’s always upset when she’s doing a poo. She pushes the potty away and runs to the other side of the room, continuing to fuss.

I follow her with the potty bowl, offering it to her and offering my lap. She shoves the bowl at me and runs away shouting, “No! No! No!” I’m pretty excited that this is her first word! But we still have to deal with this poo. I decide to put the bowl to one side and grab a terry square. It doesn’t really matter whether we catch this poo or not but we’re in a carpeted room and I don’t really want it to end up on the floor.

I think she must be resisting going because she doesn’t have a nappy on but finally she goes. I catch most of it in the bowl. Talitha looks horrified. I pick up the rest of it and invite her to come with me to flush it down the toilet. She shakes her head, recoiling and staring at the spot where the poo was. She doesn’t calm down until everything is cleared away and she’s clean and in her nappy again.

I wonder whether we’ve missed the boat on EC. Maybe 17 months is too late to try. I ask for support in online groups.

Day 5: I’ve had some good reassurance today. I feel like she will be journeying out of nappies at some point any way so why not gently, why not now?

I don’t really believe in “training” and would prefer her to find toilet independence through communication. So I will continue. It’s not stressing me out and I really do think it will be better for her as long as I’m not placing any pressure on her.

We spend the day out so we do not try any time nappy free. I continue to take her to the toilet with me and explain what I am doing. I’ve been doing this for the past couple of weeks anyway. She always thinks the flush is funny.

Day 6: I come across a straight-talking post by Kate Evans of The Food of Love: “Parents who practice Elimination Communication are overachievers.” Discuss.

It makes me laugh and feel OK about what I’m doing because I’m definitely not pursuing EC in an attempt to prove how much I rock at attachment parenting or whatever. I’m doing it because it makes sense to me.

We’ve been out again all day to day. We need to either cut out some time to give this a good start by staying home I think.

Day 7: We spend the whole morning nappy-free. We read a lot of books, have breakfast, play and do some housework. She is in knickers and remains completely dry. I offer the potty but she still won’t sit on it.

I take a good look at it and realise the problem. It’s too big! She can’t sit on it, she just falls in. It’s made for an older child. How have I only just realised this? I make a note to explore other options.

I get distracted while washing up and Talitha disappears to the livingroom. I go in to discover she’s weed in front of the TV where we’ve been playing music. Upon reflection, I should have just put her back in a nappy if I was done paying close attention.

Ah well. I clean her up, put a nappy on and put her down for a nap then clean up the little mess.

I don’t think we really have goals with what we’re doing. It’s just another part of the journey to independence. Journeys and relationships don’t really have goals, do they? EC also won’t be straightforward for us because Talitha is a toddler.

I wish we’d started earlier but I don’t know that I could have handled thinking about it when she was a newborn with all the breastfeeding stress we had. We are where we are when we are.

It’s also inconsistent because she’s with a nanny for ten hours a week and the fact that she does cloth nappies feels like enough to me. So, we’re definitely not trying to get out of nappies earlier. We’re just…on a journey.

Have you considered Elimination Communication? Any comments from anyone who’s started it with a toddler?