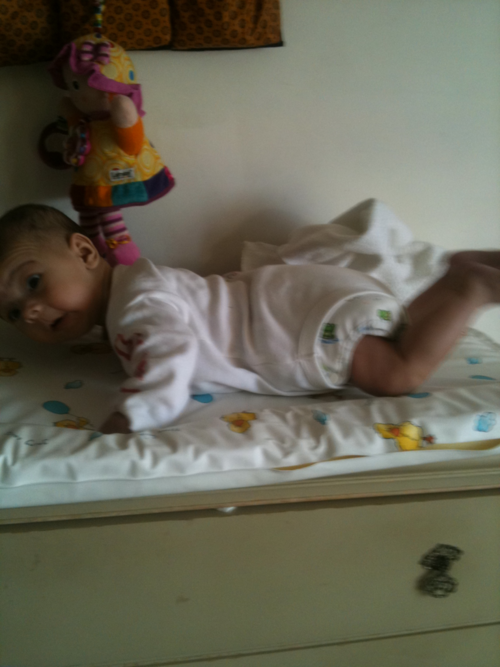 My daughter hates tummy time. I know, I should probably be a good mother and push her to achieve her developmental goals.

But you know what? Life is too short for those ten minutes she’s supposed to be on her tummy.

For a start, when is this tummy time supposed to happen? She’s never awake for more than two or three hours and she spends about an hour of that feeding. See where I’m going with this? Tummy time equals baby puke. Not worth it.

She loved it at first. In fact – and I kid you not – she was rolling over from her front to her back at eight weeks. I told friends with attempted modesty, thinking my baby was some sort of genius, as you do.

It’s an interesting time babyhood. It’s the only time where moving from lying down in one position to lying down in another is lauded as some sort of brilliant achievement. How exciting.

Anyway, she did that maybe three times then decided she’d had enough of my ill-concealed, disproportionate pride. Time to take mummy down a peg or two. No more going on the tummy.

Ever since then I put her on her tummy and she lasts one, maybe two minutes. I try not to pick her up as soon as she sounds off. Maybe she’ll change her mind. No. Three minutes of tummy time for half an hour of crying that even the boob won’t console. So not worth it.

Instead I’m clinging to a few theories. One is that babywearing gives her the opportunity to exercise some of the same muscles. I can buy this.

At sixteen weeks she won’t be passively worn anymore. If she’s wide awake, she wants to push her arms against me, to hold her upper body up so she can get a better view of the world.

Another is that it just doesn’t feel natural to place her on her stomach so why would I?

I’m probably just being lazy. I’m not adverse to admitting that. But good grief, it’s not as if she won’t eventually crawl, walk, whatever.

In the meantime, she’s becoming an expert bum shuffler.