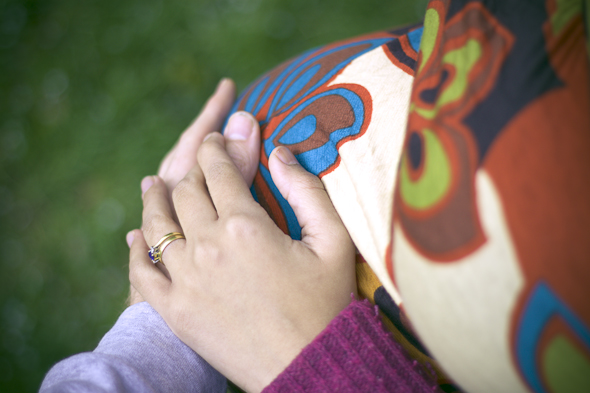 Supporting a breastfeeding group, I get an eyeful of newborn every Wednesday. It is lush. I love everything about a tiny baby: the way the curl up (though mine never did), their often closed eyes, their fragility. I am in constant wonder that this is where life begins. But I do not want one. Not now.

Of course, if I were take a test tomorrow and find it positive, I’m sure my feelings would change without prompt. Just covering myself in case that does happen and child number two is reading this years later. I really did want you. Mummy’s just working through some honest feelings out loud. Don’t you have something better to do than dig up blog posts about babies from the 2010s? Go back to exploring your teen angst on your touchscreen guitar.

It’s strange to think that just six months ago I was disappointed by a negative pregnancy test even though we weren’t trying to conceive. I was so up for getting on with baby number two back then and Talitha was only, what, nine months? In fact I found myself telepathically willing Mum2BabyInsomniac to have another baby because broody likes company. She is now pregnant (not that I’m claiming to have anything to do with that, obviously) and I’m looking at pregnant people and thinking: “Gosh, really? Are we going to do that again?”

One of the things she mentioned back when she was talking about giving her daughter a sibling was that as things get easier with your first, it’s hard to imagine going back for seconds. This is a big one for me. Talitha usually sleeps through the night now. Yes, she’s still in our bed but that’s as much because she and I both enjoy it (and Laurence…tolerates it) than anything else. Breastfeeding is a breeze and is mostly just cuddly and connecting (nipple twisting issue aside).

She’s wrecking havoc on the house as much as one can wreck on a house already slightly in a state of havoc but her exploring is fun. That’s it. She’s so much fun right now. She does something new all the time. She’s still pre-lingual but we’re having conversations. We do stuff together. Everything feels so much more manageable.

I see women with newborns and remember how hard it was. I know that it was especially hard because of our breastfeeding problems. The good news is that we won’t have to suffer through that with no clue what to do next time. I have much more trust in my own instincts, the experience of breastfeeding a child, knowledge accumulated from training, reading and supporting and communities around us that I know will help us. BUT, even so, it could be difficult again – another tongue-tie or something else – and I’d be lying if I said I didn’t find the prospect of that daunting.

I know I’d cope because people do. You just get on with it. There’s no stopping when you’ve got an older child, etc. I’m quite enjoying the breather, though.

Of course that means I’m putting off the inevitable and maybe it will be harder getting back into nappies and sleepless nights later on. On the other hand, I’m only 26. It’s not like age is against me if exhaustion is the issue.

I always imagined that my children would be closer in age. If I were to conceive tonight, Talitha would be a lot older when her sibling comes along than I was when my mother had my brother. Then again, I really can’t get my head around a fourteen month age gap. That’s like me having Talitha and a one-month-old right now. Just no. On this one, I’m staying in the camp of “you get the age gap you’re able to handle”. Having met lots of families now too, it doesn’t seem that there is any ideal figure anyway.

Another factor could be that aside from parenting I’m busy with work, volunteering, church, home (I am trying) and am now looking at adding some more training to the mix if I get accepted to qualify as a breastfeeding counselor. We’d also like to save some money for big things like, possibly, a house.

It’s not that having another child sooner would be a dealbreaker with any of those things but newborns do force a pause button or at least a “slow down” on our lives. For that matter, forget newborns, that change of pace starts in pregnancy. It did for me, anyway. I was looking at Mother’s Always Right’s post Keeping broodiness in check today and it brought back memories of the pregnancy insomnia, SPD, constant need to pee, gas, swollen ankles, mystery itching, all-day sickness – the whole lot.

Anyway, it could just be hormones putting me off. Fifteen months in, I’m still benefiting from breastfeeding ammenhorea. Maybe my body’s the one saying: “Not yet.”